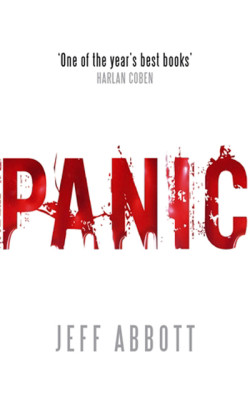 Published: 2011, June by ATOM
Genre: thriller Age: 13+
Synopsis: Evan Casher had a perfect life: great parents, his first girlfriend and a huge online following for his films. But when he comes home from school to find his father missing and his mother dead, Evan's going to learn the hard way that the people he trusted most were the people he knew least. And that a 16 year old boy might be the only one that can bring a murderer to justice.

Evan Casher is a 16 year old critically acclaimed film maker. His mother has been brutally murdered by a corporate espionage group called the Deeps. The CIA are involved, but even there they have a few rotten eggs- enough of them to offer no protection to Evan, whose mother stole incriminating evidence against Jargo and his espionage group. Evan must flee from everyone, but he cannot bring down his mother’s murderer without help. He must decide which side he is on- and pass through the net of lies to find the truth.

The cover of Panic prudishly suggests “What if everything in your life was a lie?”- and one would expect to find a few shady characters, maybe some hidden agendas and a smattering of fibs, but nothing comes close to the real thing. Anyone reading this Jeff Abbott’s YA debut would struggle to find a novel where the characters deceive, cheat, and hide as much as they do in Panic. Some people might struggle with the frankly continuous onslaught of lies, but they enable Panic to become spontaneous and (relatively) unpredictable.

Panic is being re-marketed by Atom (at least in the UK) for the YA genre. Having read plenty of reviews on the “adult” version, which was published several years ago, I can firmly say that Panic is probably far more relevant for teenagers like myself than the adult market it seemed to be aimed at. Comments have been thrown around, including the lack of three-dimensional characters, lack of suspense-of-disbelief and a predictable plot – yet, in the YA market where improbable ideas are far less restricted, Panic is actually a reasonably good novel that is really quite gripping.

Anyone looking for a fast, chase/thriller novel will be thoroughly entertained by Panic. It has a lightning fast pace with plenty of cars and bullets, with a 16 year old caught in-between, trying to outrun professional spy-organisations, one legal and the other illegal. Jeff Abbott successfully manages to plant doubt into the reader’s mind as to which has the morally high ground- the CIA or the Deeps?- and the confusion that follows is one of Panic‘s strongest assets. Evan must trust one group, but which and when and how is very much undecided. Deceit and clever thinking allow him to trump both until he can fully decide.

Evan Casher’s ability to manipulate and effectively beat the two groups, who have had training as well as years of experience, may prove too much for some readers, but like so many teenager-spy novels, this is something that comes as ‘part of the package’ and a little suspense of disbelief is enough to pocket those doubts.

Evan Casher is a relateable protagonist. He isn’t a star character, but then again Panic doesn’t claim to be a novel that centres itself around creating superb characters. Evan is likeable, and that is all he needs to be. His father, on the otherhand, was rather derivative, and the speech and emotions of both Evan and his father seemed stiff and unreal while they were together. Jargo is relatively uninteresting as far as villains go; Abbott gives him nothing to stand out from any other villain in any other thriller, although his son is fascinating, particularly towards the end.

Atom have done well to re-market Panic as something for teenagers- it just feels so right. For sceptical adults, Panic is far too awash with far-fetched ideas to be enjoyable, and a 16 year old protagonist can’t help in selling it to a market where everyone left their childhood a long time ago. Panic is a novel written for YA, and you’ll find it a ravaging read if that’s your thing. I certainly did- it had me turning the pages at an incredible rate.