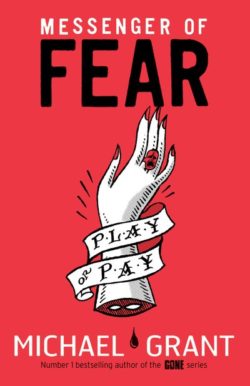 Published: 2015, April by Electric Monkey
Genre: supernatural Age: 14+
Synopsis: A twisted take on the battle of good and evil from Michael Grant, the dark genius of YA Fiction. When Mara wakes up lying in a field of dead grass and shrouded by a heavy mist, she can remember nothing but her name. At first she thinks she is dead. But then she meets him: young, good-looking but pale almost to translucence and dressed all in black. He is the Messenger of Fear. But what does he want with her? And what is the significance of the dead girl in the coffin? The Messenger sees the darkness in young hearts, and the damage it inflicts upon the world. If the wicked go unpunished, he offers them a game. Win, and they can go free. Lose, and they will live out their greatest fear. But why has Mara been chosen to accompany the Messenger and what secrets are lurking in her memories that are just out of reach? Messenger of Fear is a fantastic allegory of our times in the spirit of The Hunger Games or Divergent. It is about the pain of adolescence, teen suicide, and guilt. It is the kind of gothic horror that could only have come from the pen of Michael Grant: the man who gave us GONE.

Since finishing the Gone series, Michael Grant has spent the last few years churning out novels and series like the Armageddon is upon us. He’s deftly explored a technological world of nanowarfare and governmental conspiracy in BZRK; dipped into an alternate World War Two with combative women with Front Lines; and in Messenger of Fear, dipped his toes into the waters of supernatural fiction. Some of these experiments have paid off more than others.

Messenger of Fear, unfortunately, is one of his weaker attempts. Though a fascinating concept – a supernatural force tasked with the punishment of anyone who has gotten away with their sins – Grant fails to pull it off any more than as a proof of concept. And the problem, predominantly, lies in two things: the lack of any driving force or real conflict that constitutes a plot beyond the relatively contrived voyeuristic glances into the lives of four teenagers; and a protagonist who suffers from amnesia and therefore has little characterisation.

That said, Messenger of Fear is probably Grant’s most introspective and philosophical texts, dealing with ideas of punishment and justice (though rarely subtly). The antagonists – this time cruel teenagers – are caricatures, with little room for any moral ambiguity. Some interesting ideas are snowballed around towards the end of the novel – including some much-needed world-building and a “revelation” that should have come much earlier – but as a whole, Messenger of Fear never feels like an establishing novel, never really moving beyond a beginning.

More in the Messenger of Fear: