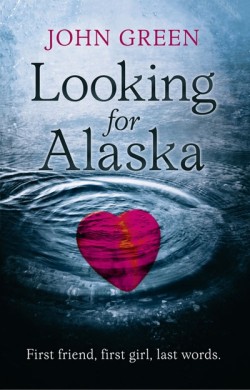 Published: 2005, March by Harper Collins
Genre: bildungsroman Age: 15+
Synopsis: A vivid, passionate and intensely moving YA novel from prizewinning author John Green. “In the dark beside me, she smelled of sweat and sunshine and vanilla and on that thin-mooned night I could see little more than her silhouette, but even in the dark, I could see her eyes – fierce emeralds. And not just beautiful, but hot too.” BEFORE. Miles Halter’s whole life has been one big non-event until he starts at anything-but-boring Culver Creek Boarding School and meets Alaska Young. Gorgeous, clever, funny, sexy, screwed up and utterly fascinating she pulls Miles into her world, launches him into a new life, and steals his heart. But when tragedy strikes, and Miles comes face-to-face with death he discovers the value of living and loving unconditionally. AFTER: Nothing will ever be the same. Poignant, funny, heartbreaking and compelling, this novel will stay with you forever.

The Great Perhaps. Miles “Pudge” feels a yearning for the possibilities of life. He leaves for a boarding school, hoping that there, it will be easier to find than at home, in a school where nobody thinks like him. It is. He meets the Colonel, his room-mate, and befriends his social group. But more than anything, he sees Alaska, crazy, funny and passionate, but more than anything, gorgeous. This is Before. Nothing will be the same again.

This was my first John Green novel, and I realised that, after reading Looking For Alaska, this was John Green’s debut novel. (Poignant it may or may not be, but I have decided to read his novels in the order he wrote them.) Looking For Alaska doesn’t read like a debut novel, it reads like the novel of someone who is experienced and is a big name in the literary world, which, ironically, John Green has sort-of become. He is an author who writes so well it can’t be healthy.

Looking For Alaska is a Perks-of-Being-a-Wallflower-esque coming of age novel, and while paging through this book at high speed, I discovered what can only be called an unwritten rule of coming-of-age stories. They seem to be exempt from the general rule that novels should have unique and unpredictable plots. I knew from the start what was going to occur some 100 pages into Looking For Alaska, and yet I didn’t complain. Coming of age novels follow a certain structure: 1) Introduce characters, 2) Show the good times they had together, 3) Something drastic happens, and 4) The characters have to deal with it. Everybody understands this, and nobody holds this against coming of age novels. Why? Because the characters are what is important. Coming of age novels such as Looking For Alaska don’t offer action-packed adventures, or fantastical battles or heroic deeds from far off lands. They attempt to depict a small window of human life; a small picture of what people go through. Looking For Alaska does just that and is perfect in its depiction.

The characters are what is important, and my, are they good. Over the day or two it took for me to read Looking For Alaska, I became one of them. I was submersed in their world, and it was my world. The characters loved Alaska. I loved Alaska. Today, I spent my school day feeling depressed from what I had read in Looking For Alaska. This novel will crash into your life and won’t leave it until the last page has been turned and the last word has been read, and even then you’ll have a hard time forgetting it.

Looking For Alaska is split into diary-like entries which, rather than being dated, are a titled with a countdown to an event some way into the book – before & after. I have never seen a book structured like that, and it works a treat. Counting down to D-day, the closer it got the tenser the read. The inevitable looms over the first half like a dark, ominous cloud, never quite letting you forget that something, just something will be happening. Very soon. And when it happens, nothing will be as important as reading on and discovering the truth.

What did you think about Looking For Alaska?