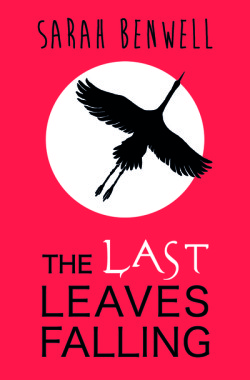 Published: 2015, January by Random House
Genre: bildungsroman, contemporary Age: 12+
Synopsis: "I cannot mourn, for I have lived a life of mountain air and cherry blossoms, steel, and honour." An achingly beautiful story of courage, loss and friendship.

You’ll remember the ‘ALS Ice Bucket Challenge’ that took social media by storm this summer; it was an unmissable and serendipitious collision of social sharing and charitable giving. In fact, you may have participated yourself, and you probably donated to a charity that helps those people with ALS (or Motor Neurone Disease in the UK), a degenerative and terminal illness that slowly takes away your entire muscle control: from the ability to walk, or hold something, to the ability to breathe and swallow. This is the disease that Sora is diagnosed with in Sarah Benwell’s debut novel The Last Leaves Falling, and the novel is his story both as a teenager and as dying man.

So yes – it’s another book about death – but mortality always has fascinated us. It fascinates Sora, too, as he struggles to comprehend what his life will mean as it reaches its end. But between the poems of dying samurai – beautiful poems – and friends newly acquired, he manages to rediscover what it means to be a living, breathing human being.

With an ill and non-white main character, The Last Leaves Falling is obviously diverse, but Benwell’s success lies in authentically replicating the conversation and mannerisms of seventeen year olds. In the chatrooms of KyoToTeenz.jp, the voices of Mai and Kaito are cringingly real; echoes of our own teenagehoods spent in the hallways of the internet. Coupled with Benwell’s sensitive treatment both of ALS and euthanasia mean that The Last Leaves Falling is a formidable tear-jerker, though it feels rawer than its metaphor-heavy predecessor The Fault in Our Stars. Ultimately, The Last Leaves Falling is about finding people to fill your life as you make difficult decisions; and that applies regardless of sex, race, age or health. So yes, it’s well worth the tears you might – or might not – shed!