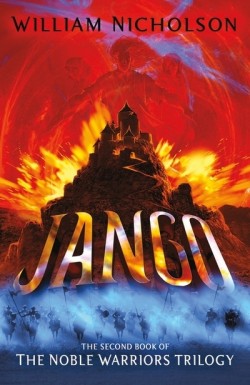 Published: 2007, August by Egmont
Genre: high fantasy Age: 14+
Synopsis: Seeker, Morning Star and the Wildman return in this mesmerising sequel to "Seeker". In a fortress-monastery on an island live the legendary warriors of the Nomana. It is a time of war and the mighty Orlan army marches to destroy the Nomana. But the Nomana are indestructible, aren't they? Seeker, Morning Star and the Wildman must all choose whether to continue serving the Nomana. Their paths will lead them in very different directions. Seeker, when tested to his limits, discovers he is the strongest warrior. Morning Star faces turmoil - she is in love with someone who doesn't love her. And the Wildman decides to rebel and plans a terrifying escape from the Nomana. The three must fight for all they know at a time when everything they know is changing...An epic fantasy of far-reaching significance.

Seeker, Morning Star and the Wildman are all learning how to serve the All and Only and be Noble Warriors. But soon a time will come when they have to decide whether they wish to continue serving the Nomana. Soon, an unstoppable force shall sweep across Radiance, and shall endanger event the strongest: the Nomana. Soon, Seeker shall be called to test the very limits of his strenth.

William Nicholson has always had an ability to write touching but deeply reflective and evocative novels. So too is Jango, the follow-up to Seeker, the first book in the Noble Warriors Trilogy. It continues following Seeker’s path in particular as he trains to become a Noble Warrior, and starts understanding more of who, what and why the Noble Warriors are, and how he is directly depended on.

Nicholson has always had a knack for writing quality middle-books, something that not all authors can do. Just like Slaves of the Mastery, the central book of the Wind on Fire Trilogy, Jango drives the story forward in an exciting and powerful way. While Jango does build up anticipation for Noman, the final novel, it manages to hold within it a story-arc that is as important if not more as the one in Seeker. In many ways, the physical culmination occurs at the end of Jango, (and if my memory is to be trusted!) Noman completes the more spiritual story arc, the search for truth.

Reading Jango for a second time, it becomes noticeable that Nicholson ‘recycles’ the personalities of a fair few minor characters from The Wind on Fire Trilogy. Nicholson has admitted this himself; and in a way, it isn’t always a bad thing. Essentially, these characters are just plot devices, being used to move on the story, and it’s almost good how we already ‘know’ them. This ‘recurring cast’, as it where, are part of what make Nicholson’s books what they are; something different from the standard fantasy. Something thoughtful, meek, but inadvertently powerful.

The main characters are, as I said in my Seeker review, fantastic. Each one has it’s own development throughout the novel, and it’s fascinating to read how each event changes each character differently. Nicholson has always been a master of characters, so it really isn’t surprising. The Noble Warriors Trilogy is about the characters changing, finding out who they are, exceedingly so, and this is what makes it such an unusual series.

The only complaints I do have about Jango are that it doesn’t really have a direction until one third of the way through, and this means it lumbers on slightly, as we don’t know what everything is leading up to. I also felt the ending was too long, and tied up too many things. Much better would have been a more cliff-hangery ending, although I do realise the importance of the closing of select story arcs.

Once again, William Nicholson manages to pen a thoughtful and deeply reflective novel, which, although it may be set in a fantasy world, is a very true depiction of the human race. Jango is a novel full of deeper meanings, of finding the truth and of self-discovery. This is a must read for anyone who enjoys heavily characterised novels (though I strongly recommend you read Seeker first).

More in the Noble Warriors Trilogy: