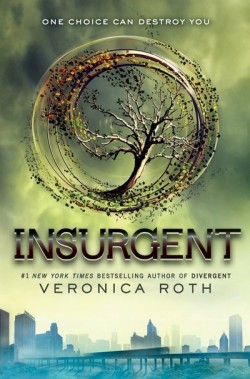 Published: 2012, May by Harper Collins
Genre: dystopian Age: 13+
Synopsis: Fighting for survival in a shattered world… the truth is her only hope. The thrillingly dark sequel to New York Times bestseller, DIVERGENT. I have done bad things. I can’t take them back, and they are part of who I am. Tris has survived a brutal attack on her former home and family. But she has paid a terrible price. Wracked by grief and guilt, she becomes ever more reckless as she struggles to accept her new future. Yet if Tris wants to uncover the truth about her world, she must be stronger than ever… because more shocking choices and sacrifices lie ahead.
Watch the book trailer

After the culling of Abnegation faction, there was only ever going to be one response: revolution. From all sides. And Tris is stuck in the middle.

If you asked any blogger what their number one YA dystopian novel of twenty twelve is, I can guarantee that the majority would say “Insurgent“. And why not? The sequel to Divergent, which was published globally in spring 2011, has already garnered over 35,000 pre-orders in the US alone at the time of writing this review (two weeks before publication). This debut trilogy by author Veronica Roth has the potential to become the biggest commercial success of the young adult dystopian genre since The Hunger Games.

It’s not really surprising that the Divergent trilogy has gotten this big: there are plenty enough readers looking for “the next big thing” following The Hunger Games (particularly now that the film has brought the series into the mainstream) and Divergent fills the Katniss-shaped gap with a smart, headstrong female protagonist Tris. Of course, there’s also the matter of the rather sweet and unstable relationship between her and Four, another key part to a commercially successful franchise, whether you agree with it or not.

Insurgent suffers from many of the middle-trilogy symptoms including a rather stop-start plot that half-knows-where-it’s-going-but-isn’t-going-there-yet, feeling, but Roth tries her best to keep things on track by bringing to the forefront the thematic narrative of the series: Insurgent tackles the misconception in Divergent that everything is either black-or-white, Abnegation-or-Dauntless, Candor-or-Amity, Erudite-or-Divergent. In part, this had already started in the tail end of Divergent, but Roth pushes it further again as we get to know the remaining factions and the factionless.

As well as that, Roth has Tris and Four come out of their honey-moon period and there are more than enough relationship instabilities to fill up the “spare” pages between the revolution. Well, kinda. I was rather delighted to find that Roth would really break their relationship before (possibly- I’m not giving anything away!) mending it. Part of this involves Tris’ somewhat self-inflicted guilt and confusion- in fact, as sadistic as this sounds, I rather enjoyed seeing the flaws in her (and Four’s, it must be said) character(s) fleshed out. Even in the middle of a revolution, relationships are unstable!

However, whilst I was satisfied by the character development shown in Tris and Four, I was rather let down by the fact that the majority of the “background” characters- the mincemeat for the killing machine that is authorship- were largely unrecognisable in their characters, and I found myself a little disorientated by the multitude of them, unable to keep tabs on each one of them as Insurgent progressed. Jeanine, the antagonist of the novel, was also a little disappointing even though Roth did attempt to reconcile her (Jeanine’s) view with the reader, it just seemed a little too sudden.

In the bigger picture, my little niggles are nothing more than a misplaced ant, however; Insurgent is an entertaining, exciting escapade into an increasingly dystopian society. I’m particularly impressed by the fact that Roth hasn’t waited until book three to begin the revolution but has already started picking away at the society in which Tris lives; hopefully, this means that we’ll have a little more time to track the post-revolution politics than we did in The Hunger Games. Insurgent, though suffering from common middle-book ailments, still manages to be a thoroughly good read, promising more than enough to keep us entertained in the next instalment. (Cliff hanger! GRRRR…)

What did you think about Insurgent?