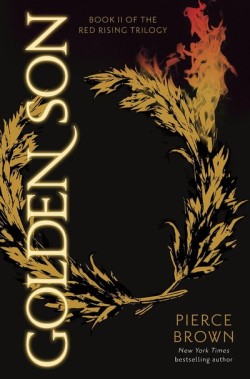 Published: 2015, January by Hodder
Genre: dystopian, sci-fi, thriller Age: 15+
Synopsis: 'I'm still playing games. This is just the deadliest yet.' Darrow is a rebel forged by tragedy. For years he and his fellow Reds worked the mines, toiling to make the surface of Mars inhabitable. They were, they believed, mankind's last hope. Until Darrow discovered that it was all a lie, and that the Red were nothing more than unwitting slaves to an elitist ruling class, the Golds, who had been living on Mars in luxury for generations. In RED RISING, Darrow infiltrated Gold society, to fight in secret for a better future for his people. Now fully embedded amongst the Gold ruling class, Darrow continues his dangerous work to bring them down from within. It's a journey that will take him further than he's ever been before - but is Darrow truly willing to pay the price that rebellion demands? Hic sunt leones.

If Red Rising was confined to the red planet, then Golden Son looses Darrow from his moorings on Mars. Two years after the relatively confined bloodshed of the Institute, Darrow is in the last legs of completing the program at the Academy. Castles and forts have been replaced by huge warships; the terraformed landscape of Mars with the vastness of space.

It’d be easy to get caught up in the excitement of the wargames; after all, they were thrilling in Red Rising. Yet Brown is clever to avoid this; we see only glimpses of the end before being sprung into the moral quagmire of the Golds themselves. It’s easy to get lost in the politics of the Society, which are violent, jealous and fickle. They’re complex, and it’s a testament to Brown’s skill that there’s never a dull moment, even if a lot of it is just strategy, a la the Institute in Red Rising. The political triumphs, when they occur, are perhaps even more fulfilling than those of blade and armour as Brown keeps us on our toes. As soon as there’s a moment of elation and predictability he rips up everything we think we know (again) – it’s hard to truly believe if anyone’s allegiance is a permanent fixture.

As the body count rockets Jupiter-ward it becomes clear that Brown is as unforgivingly efficient as his antagonist the Jackal; it’s with a seemingly cold heart that he rips apart the lives of many of Darrow’s friends, though his motives are the creation of tension and desperation, rather than immense power and riches. It’s calculated, yes; but for emotional impact. Brown seems to have defied what many writers have struggled with: the second instalment in a trilogy. Just as exciting as Red Rising, if not more so, Golden Son certainly cements this trilogy as a blockbuster sci-fi series.

More in the Red Rising Trilogy: