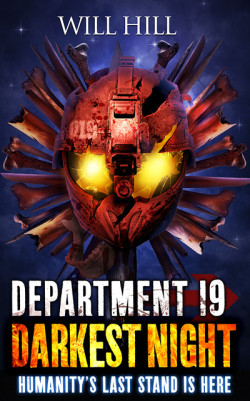 Published: 2015, June by Harper Collins
Genre: horror, supernatural Age: 13+
Synopsis: The epic conclusion in the blood-poundingly brilliant Department 19 series, from bestselling author, Will Hill. The brave men and women of Department 19 have fought Dracula at every turn, but now Zero Hour has passed and the ancient vampire is at full strength. Inside Department 19, the Operators are exhausted and fractured. Jamie, Larissa, Matt and Kate are each struggling with their own demons. When the friends need each other most, they are further apart than ever. Outside the Department, the world reels from the revelation that vampires are real. Violence and paranoia spread around the globe and, when it finally comes, Dracula's opening move is more vicious than anyone could have imagined. A final battle looms between the forces of darkness and the last, massed ranks of those who stand against it. A battle that will define the future of humanity. A battle that simply cannot be lost...

As Dracula rises to power, Blacklight is faced with deep and critical changes to the status quo. Opinions amongst the general public have become divisive as the existence of vampires has been revealed and those who drink blood and those who do not are increasingly at ends. The stakes have changed; so too has Blacklight’s response as they attempt to contain the increasingly apocalyptic rise of Dracula. A new operation must emerge for a new era of vampire-human relations.

Darkest Night may be the chunkiest installment in the Department 19 series so far, but not one page passes without urgency. As the novel races towards the series’ denouement, it’s obvious that the good guys will succeed (it would be depressing if they didn’t…) but the real meat of the story is how they will overcome the greatest threat to humanity since Dracula himself.

As with his previous books, Hill narrates in the third person; something of a rarity in recent years. It’s used to all success in Darkest Night, maintaining the uncertainty of who lives or dies – something I’m surprised he doesn’t utilise more; he’s almost too kind on his readers.

Darkest Night is the excellent conclusion to a series that is far more complex and engaging than even its premise might seem; as it wrestles with moral and ethical questions in a world not too far from ours, it delivers an epic and cinematic vision of what vampirism might look like if it really existed. Hill has come from debut writer to serialist with remarkably strength.