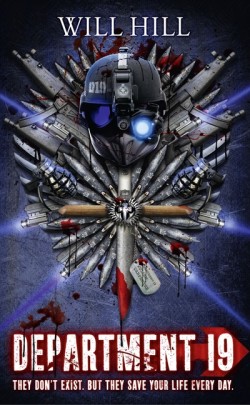 Published: 2011, March by Harper Collins
Genre: horror, supernatural Age: 13+
Synopsis: In a secret supernatural battle that's been raging for over a century, the stakes have just been raised – and they're not wooden anymore. When Jamie Carpenter's mother is kidnapped by strange creatures, he finds himself dragged into Department 19, the government's most secret agency. Fortunately for Jamie, Department 19 can provide the tools he needs to find his mother, and to kill the vampires who want him dead. But unfortunately for everyone, something much older is stirring, something even Department 19 can't stand up against…
Watch the book trailer

Everything Bram Stoker wrote is real. Over 100 years ago, a vampire by the name of Dracula was killed and buried in the Translyvanian countryside by a certain Van Helsing and his fellows. For over 100 years a secret governmental organisation has been trying to combat these ever-growing forces of evil, preventing the mass killings of humans all over the world. This organisation is called Department 19. One of their employees, whose ancestor helped found Department 19, was shot outside his house for treason. He left a son, Jamie Carpenter, who several years later is still confused about the occurrence and who feels he no longer has a place in the world.

But he does. His place is with Department 19, a place he will take sooner than expected, when his life is upturned once again by a creature that shouldn’t exist. They took his mother. Now he is coming for them.

“You’re reading a book about vampires?” is one of many similar comments I received from my friends. Hastily, I added that these weren’t those tame, Twilight-esque vampires: these were the real deal. Because they are; being a vampire isn’t a life-style choice, it’s a plague that brings with it a compulsion for blood. Human blood.

Department 19 is Will Hill’s debut novel, an action-packed, exciting, thrilling read full of blood and gore; sure entertainment for anyone who has the stomach for such a novel. This is a horror novel in the purest sense. When a vampire dies, they explode blood, covering walls, floors, and more often than not, people. Humans are shot. Through the head.

And while this may pose a problem to anyone wanting to adapt Department 19 for the cinema (I’m not sure they’d get away with a rating under 15, at least!), as a novel Will Hill’s shocking, hold-nothing-back style will enthral anyone who wants to experience the real thing: untamed and unpatronising. Don’t say I didn’t warn you…

Reading Department 19 had me torn. It’s had some incredible reviews and praise has been flung with rigour It has been wrapped in a huge marketing campaign, and something about me wanted to rip this novel apart; I was scrutinising every word, every emotion that Jamie felt. I have been incredibly critical reading Department 19 mainly because I had high expectations and expected it to be of a high standard.

It was. I kept trying to back up the fact that the characters weren’t fleshed out enough, or that the plot was weak…but it didn’t work. Department 19 may have a few minor disappointments, but these were far outweighed by the positive aspects of the novel.

For a start, the plotting was pretty amazing. The story starts with Jamie’s plight, fatherless and ill-fitting where he lives. It soon develops into a supernatural horror filled with action and, surprisingly, a chunky backstory which gave the novel some solid ground to stand on. The main plot is interspersed with small visits to the past, which help tell the story in a show-don’t-tell way, but which I felt slowed the pacing at times. Once you get past the majority of these little backstories, Department 19 takes off and packs a punch, as event after event occurs and the situation spirals out of control. The build up to the climax is incredible, leaving the reader with the inability to put down the book.

Characters. What wonderful things they are in Department 19. Everyone, human and vampire, is fleshed out and each have their own motivations and personalities. Jamie, who is in state of shock, is a character which many people his age will be able to relate too. His bravery and relenting ambition drive the book. At times he is angry, sad, disappointed or love-stricken. Larissa, who is my personal favourite of the lot, is a wonderful character who you can never quite decide whether to trust or not. I could only wish that Will Hill would have continued and accentuated her skittish behaviour long after he uncovers her secret; I really enjoyed that aspect of her character.

After reading a fair few novels narrated in first person, it was hard to get back into the third-person narrative that Department 19 presents. It felt strangely impersonal and cold, but once I got used to it, the prose was gripping and fluent and the words on the page fell away as the action unfolded before my very eyes. This emotional yet thrilling novel will sure create ripples in the book world, and I wouldn’t be surprised if this becomes the next big thing, rising to an Artemis Fowl-scale series. All I can say is I hope it does, and I cannot wait for the second novel!

What did you think about Department 19?