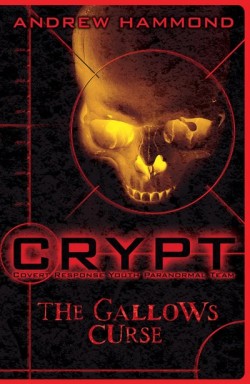 Published: 2011, September by Headline
Genre: ghost, horror, spy Age: 1-+
Synopsis: Meet Jud Lester: Star agent with CRYPT, the Covert Response Youth Paranormal Team. When a crime is committed and the police are at a loss, CRYPT is called in to figure out whether something paranormal is at work. Jud is their star agent. Jud, unwillingly paired with new recruit Bex, has just landed his biggest case yet ... people have been disappearing in mysterious circumstances while others are viciously attacked - yet there are no suspects and a complete lack of hard evidence. The only thing that links each attack is the fact that survivors all claim that the culprits were 17th century highwaymen. Can Jud and Bex work out what has caused the spirits of these dangerous men to return to the streets of London before they wreak more death and destruction? A fantastic blend of teenage spies, horror and ghost-busting for fans of Cherub and Young Bond.

Every year tens, maybe hundreds of cases of paranormal activity occur across Britain and the world. Stories of hauntings are hastily covered up by MI5. To admit to the existence of paranormal beings would create a panic even greater than that of terrorism. But there is a specialist agency that can deal with these cases: CRYPT. The Covert Response Youth Paranormal Team investigate the ghosts behind the hauntings and attempt to put them to rest, but sometimes this is impossible without large, unwanted media attention. When thousands of ghosts descend on London and kill innocent lives in unexplainable ways, this is just what happens…

The idea behind CRYPT: The Gallows Curse is both a blessing and a curse. In one sense the bloody, violent ghostly encounters is thrilling stuff and will entertain those with a stomach strong enough. However, trying to write a ghost story where the antagonists are vividly described can also tear away any suspense the novel has, and this is sadly what happens in CRYPT. Ghosts, at least in my experience, make for much more riveting entertainment if they stay a mystery and plague the characters psychologically, rather than physically. Michelle Paver’s Dark Matter is a wonderful example of how describing how the paranormal activity affects the characters rather than directly describing the ghosts is a great way of creating an atmosphere of terror and fright- especially for the reader. CRYPT: The Gallows Curse does not offer this aspect, and it was this that I was looking forward to before I started it.

In-line with what publishers seem to be saying with the demise of Paranormal Romance and possibly dystopian fiction on the YA market, there seem to be a fair few paranormal horror novels (specifically series) being launched this year- including Will Hill’s Department 19, which made a huge splash critically and commercially (at least, from what I saw!). It’s always hard to read something so similar within a few months and not be able to make comparisons- but I think in this case, Department 19is a clear winner in this small battle.

The concept and initial ideas Andrew Hammond poses are solid; CRYPT even has a solid excuse as to why there are teenage ghost busters around (for anyone interested, it’s that adolescents seem to have increased Extra-Sensory Perceptions compared to adults, and are thus more sensitive to paranormal activity)- not something that is done in most teenage spy/agency novels. Hammond steers CRYPT: The Gallows Curse in a very scientific direction, and while this means that the CRYPT is really quite plausible, it does rob the paranormal activity of its mystique and sense of danger.

As for characters, Hammond doesn’t quite manage to bring them to life. Jamie Goode, the star of CRYPT, has an interesting dilemma but his emotions are weakly conveyed in the prose and it is hard to feel much empathy towards him. On top of that, Hammond sees fit to introduce a sassy, intelligent (probably) love interest who seemed just a little too good to be true and is overly two-dimensional. She’s part of a new batch of recruits who all seem to know what they are doing despite having only taken entry tests and being inducted for a couple of days.

Whilst CRYPT: The Gallows Curse may appeal to teenage boys who care for a simple bloody story about teenage ghost busters, for anyone looking for a deeper and more suspenseful novel, this is not the book you have been waiting for. As much as I hate to say this, Andrew Hammond’s debut novel offers thrills and spills, but beyond that, CRYPT is little more than what is probably the beginning of the rise of paranormal horror that is starting to dominate the YA book-o-sphere ever so slowly.

What did you think about CRYPT: The Gallows Curse?

More in the CRYPT: