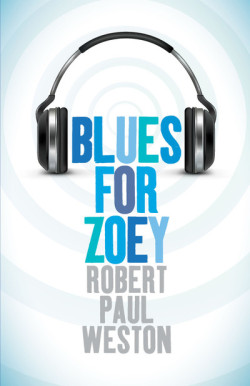 Published: 2015, February by
Genre: bildungsroman Age: 15+
Synopsis: Kaz Barrett should be saving for college. Instead, he saves his pay from the Sit'N'Spin Laundromat to send his mother to a very expensive sleep clinic in New York. His mother suffers from a rare neurological disorder, and both Kaz and his kid sister worry that one day, maybe tomorrow, their mother will fall asleep and never wake up. But when pink-haired Zoey walks past the laundromat's window, Kaz's ordered life begins spinning out of control. Smart, mysterious, and full of music, Zoey is unlike anyone Kaz has met...but there's another side to her that he can't quite figure out. When he goes looking for answers, he finds a whirlwind of lies, half-truths, and violence.

I met Robert Paul Weston in the plush interior of the Canadian High Commission, where he read an extract from Blues for Zoey, a YA novel currently only published in North America. The third chapter, to be particular; “A Side Note about Becky Leighton”:

“She was the first girl I had sex with.”

Certainly – it’s a hook, and much like the surrounding chapters, the third chapter is a particularly funny treatment of Kaz Barrett’s life so far; which consists of folding clothes at his part-time job in the Laundromat below his apartment, and studying school. It’s in these first chapters that Weston strikes a particularly John Green tone, marking his prose with Kaz’s witty but otherwise slightly inept comments; more specifically, a tone of An Abundance of Katherines and Paper Towns. Kaz – formerly well off, now exiled to Evandale at the death of his father (his mother suffers from the fictional disorder “somnitis” and can’t hold a full-time job) – falls head over heels in the headlights of dreadlocked “Jesus girl” Zoey Zamani and her crazy home-made instrument the “rood-rattler”.

Weston injects a more than unhealthy dose of Manic Pixie Dream Girl into Zoey, who is allusive, tantalising and ensnaring. As Blues for Zoey nears its end, there are glimpses of greater depth but I’m not sure I can reward Weston when  really only the final paragraphs hint at hidden depths. It is an interesting turn, however, and I can’t help thinking that Weston could have done a lot better if he had told the encounter between the two adolescents from her darker perspective. As it stands, Zoey’s sparkle, whilst initially interesting, quickly fades and the novel drifts into an apathetic final third. Saying that, Weston does get credit for his portrayal of non-white individuals in a non-issue manner- including Kaz and his parents.

As a young adult author, I think Weston has potential. His prose is fluid and dynamic; technically, Blues for Zoey is a good book; well written, well-paced for what I think Weston was trying to achieve. It’s just that the story he chose to tell wasn’t as sparky and original as it could have been: the novel doesn’t really move beyond its Manic Pixie Dream Girl premise, which really inhibits Kaz’s story. The first few chapters are fun and enjoyable but it’s only really when I get to the end – and the revelation of backstory – that I really felt I was intrigued beyond a mere interest for another coming-of-age tale about an unattainable summer crush.