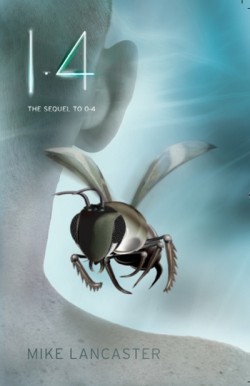 Published: 2012, May by Egmont
Genre: sci-fi Age: 12+
Synopsis: It's a brave new world. In the far future, people no longer know what to believe...Did Kyle Straker ever exist? Or were his prophecies of human upgrades nothing more than a hoax? Peter Vincent is nearly 16, and has never thought about the things that Strakerites believe. His father - David Vincent, creator of the artificial bees that saved the world's crops - made sure of that. When the Strakerites pronounce that another upgrade is imminent, Peter starts to uncover a conspiracy amongst the leaders of the establishment, a conspiracy that puts him into direct conflict with his father. But it's not a good idea to pick a fight with someone who controls all the artificial bees in the world.

Over one millennium ago, audio tapes were discovered that suggested that humanity was being upgraded on a regular basis. The tapes, known as the Straker Tapes, were heavily disregarded by scientific circles, but there are those who belief them to hold the truth to everything. And they may not be so wrong…

I didn’t expect there to be a sequel to last year’s British YA sci-fi offering 0.4, but I was pleasantly surprised when 1.4, fitted in a similar jacket to the aforementioned, popped through the mailbox. Often it’s easy to anticipate if a novel is a standalone or part of a series (however long that series may be): there are cliffhangers, unresolved themes, character arcs that face incompletion et cetera et cetera. However, Mike Lancaster’s work does not conform to such standards: it is, by nature, as the way he tells it, not able to conform to such standards. After all, it’s a speculative play on the “found footage” genre in book form. Does that make it a lesser piece of storytelling? No, it simply means that it has to be read differently.

In a sense, 1.4 isn’t really a sequel, anyway: set a millennium after 0.4 and the discovery of the “Straker Tapes”, the novel features an entirely new set of characters, background and setting. The only continuity between the two is the basic premise, the idea that humanity is regularly upgraded by an alien force and used as a resource: our humanity, emotion and self are all side effects of this. However, the two novels do share a great deal of their DNA: both explore the lives of two teenage characters, boy and girl, and their reaction to the discovery that all is not what they thought it was. In fact, 1.4 almost feels like a rehash of 0.4, an attempt on Lancaster’s part to try again. And though a few new ideas are explored in this sequel, they are not explored deeply enough and don’t affect the narrative enough to make it considerably different from 0.4.

Partly, this is due to the narrative style Lancaster has chosen: a sort of evolved “found footage” that is not often found in the written word, that restricts how the climax is told and developed. Consequently, the ending feels somewhat rushed and incomplete: just as we reach the most exciting part of the novel, our narrator is cut out and the story is over, left to speculation, and whilst I was alright with that in 0.4 as the basis for a sort of future-cultural reference, it didn’t feel right in 1.4 where other ideas were being explored.

That being said, 1.4 is an enjoyable and entertaining read, no doubt about it. I was particularly intrigued by Lancaster’s exploration of belief and faith. It just so happens that my expectations were very high and 1.4 didn’t meet all of them: but as a novel, it’s a quick, pacy read that I would certainly suggest to anyone who enjoyed 0.4. Again, I must reiterate what I said in my review of 0.4, that the characters are underdeveloped due to a lack of time to explore them fully in the short novels, but Alfa and Peter are still sufficiently interesting to make 1.4 more than worthwhile. Both 0.4 and 1.4 are certainly worth reading, and their length won’t cost you much time at all: I would have managed to zip through 1.4 over a couple of days with extremely limited reading time if I hadn’t taken a break from reading due to exams. However, I do feel that Lancaster has exhausted the idea by 1.4 unless he adds a significantly different spin to another sequel. I look forward to reading more of his work. Perhaps a interstellar space-opera, if you’re reading this, eh?

More in the Straker Tapes: