Many of you who are following my on the ol’ twitter will have heard that I was invited to the Department 19 pre-publication event at HarperCollins featuring the very man himself, Will Hill. He spoke about his debut YA horror/thriller novel which will be publishing on the 31st March. I was lucky enough to be able to read Department 19 before the event, so I could grill Will Hill with many questions, to many of which the answer was a sneaky glance at his editor. Obviously something was going on!

Anyway, after getting lost on Fullham Palace Road (I was always under the impression I had awesome navigation skills. I think I’ll blame Google Maps for this one… ;D) I entered the frankly gigantic offices of HarperCollins. After being handed a parcel with the words “private and confidential” stamped on it, I was escorted to what must have been the 4th floor, where the event was being held. 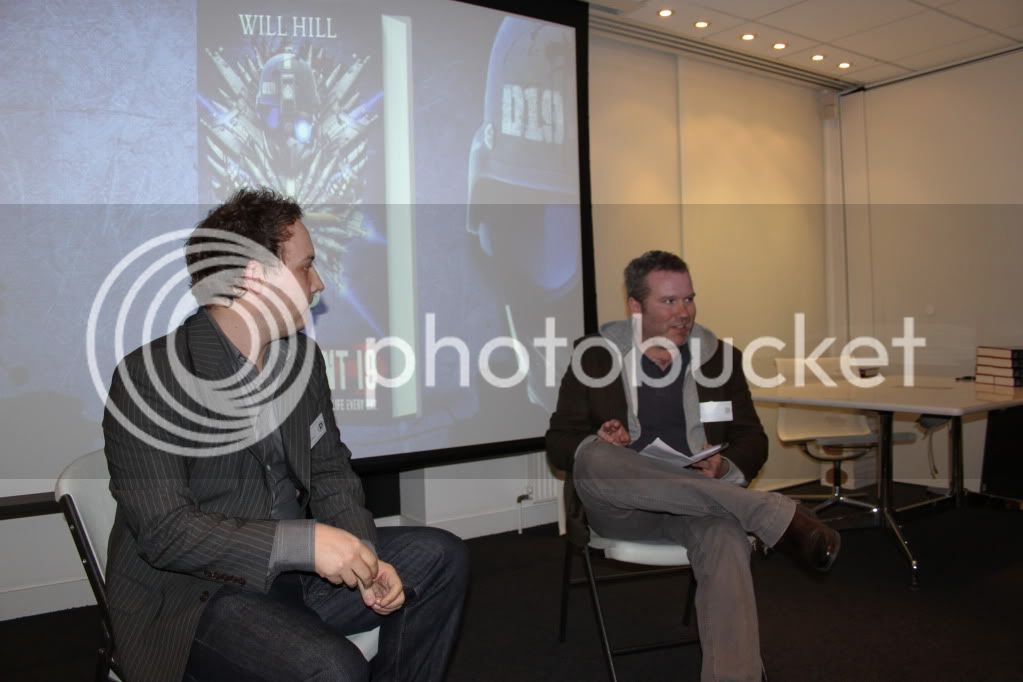 HRH Will and the Editor-king Nick Lake

I’m not sure what time I arrived at, but the event was officially starting at 6:30 and there were already a great number of people there, so I assumed that I was one of the last! The evening started with a mingling session, in which I spoke to a great many new people I hadn’t heard of or met before. As always, I was struggling putting faces to names (I’m bad remembering peoples names anyway. What can I say?!) but I was soon talking to Tiffany, the gorgeous publicity executive at HarperCollins, and to Sarah from “Sarah’s Reviews”. I believe we were talking about Twilight when Will Hill and the Editor-king Nick Lake of HC came to talk to us.

Warning: gushing paragraph about Will Hill to follow!
So, I got talking to the author himself, who I expected to be older but was actually around 30, I would hazard a guess (sorry Will, if you’re reading this and you’re younger! xD). We found out (to mine and Will’s horror) that the King-editor, Nick Lake, actually enjoyed the first Twilight! I also discovered that Will Hill worked at Hodder for numerous years before becoming an officially published author (with HarperCollins, ironically!). He told us that he likened himself far more to Matt in his novel, who, incidentally only has a speaking role in 1% of the whole book (he’s in a coma…) so I think we can speculate that Matt will be getting a larger novel in Department 19 2

A very groupy shot of the whole event

After the mingling, we all sat down to watch the Department 19 trailer and part of the viral campaign (it looks awesome!) as well as a chat with Will and The Editor-king Nick.

Some things I learned (in bullet points because otherwise this post will get extremely long!)…

Apparently, Department 19 is currently a trilogy, although sneaky glances say that it will probably be longer. Hooray! (Note: Will does know the ending, he just doesn’t know how long it will take to get there…)

After the Q&A grilling, everyone was allowed to get Will to sign a hardback finished copy of Department 19, the cover of which looks gorgeous! I got my ARC signed as well, and will probably do a giveaway for the Hardback copy. More details to follow!

I also managed to pinch a few other copies of books, including a John Green book Looking For Alaska (I had a great discussion about John Green with Elly while waiting in the queue to get my books signed!)

The evening ended at 8:30, when I promptly departed to be escorted through the dangerous London night by my butler (Read: father!), with

a bag full of books! All in all, this was an awesome event, and Will Hill is much more awesome than expected. Exciting stuff! Make sure you look out for Department 19 when it hits the shops at the end of this month.

What did you think about EVENT: Department 19 Pre-publication event?