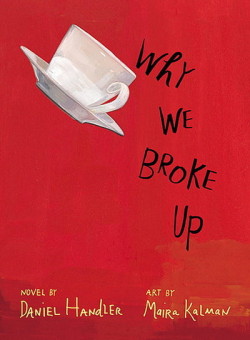 Published: 2012, August by Electric Monkey
Genre: bildungsroman Age: 14+
Synopsis: "I'm telling you why we broke up, Ed. I'm writing it in this letter, the whole truth of why it happened." Min Green and Ed Slaterton are breaking up, so Min is writing Ed a letter and giving him a box. Inside the box is why they broke up. Two bottle caps, a movie ticket, a folded note, a box of matches, a protractor, books, a toy truck, a pair of ugly earrings, a comb from a motel room, and every other item collected over the course of a giddy, intimate, heartbreaking relationship. Item after item is illustrated and accounted for, and then the box, like a girlfriend, will be dumped.
Watch the book trailer

A relationship destined to fail: the basketballer, cool, mainstream, popular; and Min, different. Against all odds, against all predictions- they get together. Their breaking up marks the fulfilling of the prophecy: it’ll never last.

Sometimes the simplest ideas are the best ideas: not overcomplicated or buried under a mountain of concepts and high-brow theory. Sometimes, stripping back life to its essential qualities; distilling it to love, and friendship, and heartbreak and coffee; sometimes that makes for a better book than one filled with a tenuous plot. No sensationalism, just pure, untainted life. Something we can all relate to. No larger-than-life characters like in John Green’s Looking for Alaska, no overload of angst that we read in The Perks of Being a Wallflower. Just simple heartbreak, emotional devastation followed by recovery -and, eventually- progression. Like in real life. Nobody to save you from your grief, only time to dull the pain. Why We Broke Up is all of these things.

All relationships come to an end, whether through death, divorce or separation, and Daniel Handler (author of the Lemony Snicket series, though you’d hardly know it) doesn’t try to dampen the fact. Why We Broke Up – even the title admits it. No point pretending it won’t happen; it will happen. What is more interesting is how it happens, and this, Handler captures wonderfully. The tension of wanting to know how and why is what drives the novel forward through layers and layers of inescapable memories, scenes from a film, edited together by our protagonist Min. Why We Broke Up is not a celebration of love but a study of the demise of it; the way things fall apart in an instant without a second thought.

Handler’s hold and familiarity with relationship and the unbecoming thereof is clear throughout the novel: anyone who’s ever had a meaningful relationship and breakup will notice parallels and similarities: the adjustment time after, where you can’t bear to give back the other’s things because that would feel like it had properly ended, and you’re not quite ready for that yet is just one of them.

Handler inhabits his protagonist wonderfully, writing idiosyncratically, the prose a stream of consciousness, unedited from the eyes of heart-broken Min, unforgiving Min, who put all her eggs in one basket and saw them all smashed. The story isn’t really about Min, but at the same time it is, detailing her coping mechanisms and describing her hopes, dreams and naiveties. As Why We Broke Up closes in on the home run, things become increasingly telling and we see Min for what she sees herself as. Nothing and everything: fitting into no group, not artsy, not athletic, not Christian, not promiscuous, not Goth. Just “different”. She, I suspect, embodies everything we think we are: unlabelled, just us, hoping for approval. Her meandering thoughts narrate the simultaneous rise and fall of her relationship with Ed, her references to artshouse films and jazzy music (which, incidentally, Handler made up- and interesting choice in an era where most bildungsromane reference existing media, and one I think is perfect because it allows everyone to insert their own tastes and styles) alliterate to memories of things she would rather forget, but doesn’t really: like anyone coming out a relationship, she both clings to and despises what made her so happy before.

As I said earlier, this is not a glorified, sensational, emotional roller-coaster of a bildungsroman: it is an honest, truthful and sympathetic portrayal of love and loss. The illustrations, beautifully painted by Maira Kalman, punctuate Min’s thoughts, her gratuitous verbing of words and the re-enactments of her lost love. Handler has written a wonderfully, understated piece of drama, untainted by anything surreal. Why We Broke Up is a quiet book to read during a quiet time, a digestible piece that allows you to take time to get to know the characters and see them for all their inconsistencies and hypocrisies of human nature.