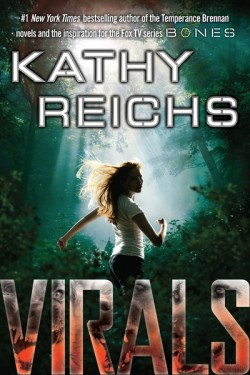 Published: 2011, May by Random House
Genre: detective, mystery Age: 13+
Synopsis: Tory Brennan is as fascinated by bones and dead bodies as her famous aunt, acclaimed forensic anthropologist, Tempe Brennan. However living on a secluded island off Charleston in South Carolina there is not much opportunity to put her knowledge to the test. Until she and her group of technophile friends stumble across a shallow grave containing the remains of a girl who has been missing for over thirty years. With the cold-case murder suddenly hot, Tory realises that they are involved in something fatally dangerous. And when they rescue a sick dog from a laboratory on the same island, it becomes evident that somehow the two events are linked. On the run from forces they don’t understand, they have only each other to fall back on. Until they succumb to a mysterious infection that heightens their senses and hones their instincts to impossible levels. Their illness seems to have changed their very biology – and suddenly it’s clear that the island is home to something well beyond their comprehension. It’s a secret that has driven men to kill once. And will drive them to kill again…
Watch the book trailer

Tory is the niece of the famous forensic anthropologist Temperance Brennan, and she’s following in her footsteps. Young and yet already very intelligent, Tory is the ring-leader of her friends, who all live on a remote island where normal things such as ‘going to the mall’ or watching a film at the cinema isn’t as easy as it sounds. And yet, this is Tory’s dream. She loves exploring Morris Island- upon which she and her father live. She’s obsessed with a wolf-dog cub,  a cross between a wolf and a dog. When he goes missing something is wrong , particularly when its parents and sibling start howling at the fence of the LIRI, a prestigious research facility located on Loggerhead Island. As the mystery unravels, things become more complicated than originally intended, and Tory and her friends become a little more inhuman in the process…

It’s not often you stumble across a novel that actually lives up to the claims made on the front cover, but Virals, Kathy Reichs’ young adult spin-off series of Bones, certainly does. Packed with an exciting storyline and some great writing, Virals is the sort of book that will appeal to most people. It’s not chick-lit in the slightest, but I have a feeling even the hard-core paranormal-romance lovers will thoroughly enjoy Virals.

It isn’t hard to see that Kathy Reichs is an experienced author. Virals is perfectly paced with enough action to move the story along, but also contains plenty of back-story and description to make it realistic. Reichs knows how to write in such a way that is both absorbing and able to convey the emotions and situation the main characters face. Virals is narrated in mainly first person past tense, until it becomes present tense about halfway through. Though not an obvious way to narrate a novel, it works and increases the engagement of the second, more action-packed half of the novel. During the first half, the narrator Tory sometimes speaks directly at the reader, which can be disconcerting at first. But once you get your head around it, isn’t too hard to follow.

If I had to liken Virals to any particular novel, it would be to the Maximum Ride series by bestselling author James Patterson. This is mainly due to the characters, and to be perfectly honest, I think Virals is all the good parts from Maximum Ride plus some. The main quad – Tory, Ben, Hi, and Shelton – while not quite convincing at first, soon become a great group to follow, and Hi’s humour particularly, reminded me of Max. Tory, who’s a bit on the snarky side, but incredibly intelligent, is one of the better tomboy characters I have encountered, though this generates some predictable events (notably a debutante ball- the outcome of which you can probably guess).

The actual plot – which is based on mystery/crime – is simple yet effective. Towards the end it wasn’t hard to predict the outcome, but during the first 7/8s of the book the plot is intriguing, and provided some great conspiracy theories from yours truly! As this is the first of a headlined series, I’m hoping Reichs will up her game and really craft some intricate and wonderful plots in the novels to come!

While Virals may cover some minor clichés (private-schooled snobs, motherless), these are negligible to the pure enjoyment of actually reading this debut YA novel from Kathy Reichs. It quickly supersedes any doubts that can be formulated. Virals is an excellent YA novel, brimming with mystery, action, and a science-fiction twist with some kick-ass characters. If you like any of those, I highly recommend you read this novel!

What did you think about Virals?

More in the Tory Brennan: