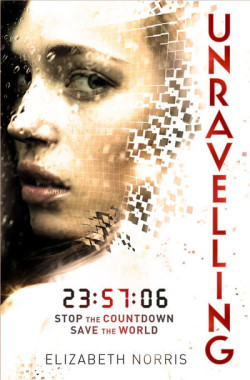 Published: 2012, June by Harper Collins
Genre: paranormal romance, sci-fi Age: 13+
Synopsis: STOP THE COUNTDOWN. SAVE THE WORLD… Leaving the beach, seventeen-year-old Janelle Tenner is hit head on by a pickup truck. And killed. Then Ben Michaels, resident stoner, is leaning over her. And even though it isn’t possible, she knows Ben somehow brought her back to life… Meanwhile, Janelle’s father, a special agent for the FBI, starts working on a case that seems strangely connected to Ben. Digging in his files, Janelle finds a mysterious device – one that seems to be counting down to something that will happen in 23 days and 10 hours time. That something? It might just be the end of the world. And if Janelle wants to stop it, she’s going to need to uncover Ben’s secrets – and keep from falling in love with him in the process…
Watch the book trailer

Blinding headlights. A loud motor. Heat.
One crash. Death.
Then life, again. Janelle has been brought back. By whom? Why?

I believe readers have a right to be fussy: there are so, so many novels out there that I believe we, as readers, should be able to pick and choose the cream of the crop. Why spend several hours of anything that is sub-par or just not doing “it” for you? I want to spend my time reading Great books, not just average or okay books. And some books are good and I can forgive them for not being great and others I cannot. Unraveling, I’m not sure I can. Perhaps it’s because I’ve been spoiled by reading J M Barrie’s Peter Pan recently, or perhaps it just didn’t kick it for me: either way, I felt uninspired by this work of what I would call “commercial” fiction.

On the surface, Unraveling is a breezy read: urgent, pacy and thrilling. Chapters are (predominantly) short and quick-fire, things move quickly and there’s plenty to keep you awake with. Elizabeth Norris is a fluent writer: her prose is sleek and doesn’t get in the way of the story. She’s also capable of vivid scenes- particularly at the start when our protagonist’s life sort-of flashes before her eyes.

The thing is, underneath it all, it all seems rather empty. There’s the awkward change from what we think is a paranormal-style novel to a flimsy sci-fi where science is absent and magicked away with “oh, you wouldn’t understand it anyway” and a basic multiverse concept. Then there’s the very swift romance between Ben and Janelle. It’s not instalove, but it’s certainly a little to intense for the little time it exists, though, of course, teenage attraction often has that sort of urgency so I suppose it is forgiveable.

Our characters, however, are an entirely different matter. In hindsight, they’re not all that great: Janelle is a pretty wonderful jack-of-all-trades, keeping her family together and doing well at school and Ben is a perfect, moral, mysterious love interest (there’s not much more to him than that in the whole novel). A few other, reasonably well-used characters appear throughout who are relatively interesting (Janelle’s sidekick Alex is amongst those) but apart from that, there is little else.

There’s a reason this review is relatively short and skimming: there is not much to say. Unraveling is exceedingly face-value, with little or no depth to offer the reader to contemplate hidden motives or anything after reading. Character’s intentions are clear (or if they aren’t, we can’t second guess what they’re about to do because of a lack of information- in that sense, the ending is surprising) and don’t need any deciphering. It’s almost as if Norris feeds us everything we need to know in this I Am Number Four-esque read. Unraveling will appeal to anyone who is looking for a paranormal-romance that doesn’t ask big questions.

What did you think about Unraveling?