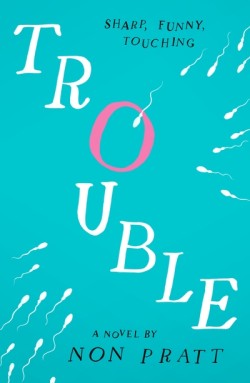 When you know an author personally, it’s always a little scary to review their new book for fear that it’s a really terrible book or you just didn’t get on with it.

Thankfully, this is not the case with Non Pratt’s Trouble, a story of sex, love and teenage pregnancy. (It’s about a whole lot more, including family and friendship, but it just didn’t have the same ring to it!) In Hannah’s world, there’s school and the park on Fridays evenings, when anyone who’s anyone meets up for flirtation, banter and the occasional (who am I kidding?!) hookup. It’s where the Darwinian forces of social interaction are at their strongest: weeding out the weakest of the pack and using them as sacrificial lambs for the entertainment of those at the top of their game. It’s where Hannah and Katie, two best friends, are expecting to pull. It’s also where new-boy Aaron has been dragged along by his new “friends”, the Basketball boys, even though it’s not remotely his scene.

Told from the alternating perspectives of Hannah and Aaron, the setup doesn’t really allow for much surprise: the key players are identified at the start, the premise of the novel is outlined in the synopsis. You’d expect Trouble, to be predictable to say the least: where can an author go with such a plot? And yet; there was one moment where I could not believe what I was reading, could not believe what I thought was the truth, and as always with these books, characters are key.

Trouble starts in what I found to be a pretty unsympathetic way: Hannah and Katie are presented as two thoughtless girls on the prowl who know what they want, when they want it and with whom they want it. I genuinely found it hard to empathise with them – I can’t personally relate to characters who pick up boys and drop them where they found them at the drop of a hat – and was rather disappointed. So I slept on it, had a brief nap: and came back to Trouble expecting more of the same. Things only get better. I’m sure this was Pratt’s (I’m sorry Non, but I’m not sure I can take you seriously by calling you by your surname!) intention in order to build a more engaging character arc, because finding out that she’s got a bun in the oven changes Hannah’s behaviour completely and utterly. It devastates her at first – who wouldn’t be? – but as she eventually comes around to a decision as to whether to keep it or abort it, our sympathy turns, as does her character. Having a baby has made her responsible for her actions. Her priorities shift.

Aaron’s problems are presented as secondary to Hannah’s, but really, they’re just as bad. What I do want to say, without giving anything away, is that I do feel that Pratt held on to his secret a little too long: by the time we actually find out what happened in his life before Kingsway School it feels as if it doesn’t matter any more: he’s a new person and his past no longer has a hold on him. For us, our identities are in the choices we have yet to make; for old people, it’s in the choices they’ve already made.

Teenage pregnancy is hardly a new theme in YA fiction, but Pratt has done well to create an original story that will force you to ask some hard questions of yourself in a book filled with a brilliant cast of characters, the majority of which I haven’t mentioned here (I LOVE Neville). Read Trouble, even if you’re not into teen-pregnancy books; there’ll be plenty for you to enjoy otherwise in this delightful book that takes life as it comes.