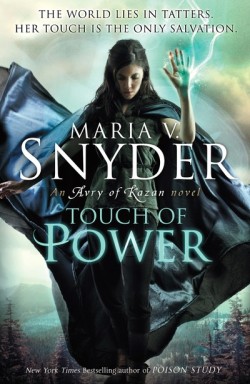 Published: 2011, December by MiraInk
Genre: high fantasy Age: 13+
Synopsis: What s the cost of a deal with the devil when you have the powers of a god? When Avry was growing up, Kazan was a prosperous land, rich in resources and served by a respected tribe of healers. Until the plague came. Developed by the poor territories to the north and west, the terrifying disease ravaged the people of Kazan and drove Avry s family away. Four years later, imprisoned for using her powers, Avry s beginning to lose hope, when a band of strange men break into her cell and steal her away. They need her special magic to save their prince. The Prince who ordered the plague s first release. Avry s freedom now rests on using her healing touch to save the very man who took away everything she loved...
Watch the book trailer

In all the fifteen realms, none are more persecuted than the Healers. They have been blamed for the deadly plague that has been ravaging the lands, and Avry is the last of their kind. She’s been on the run for three years; moving from town to town, healing the sick before fleeing again. Now her time has come to face the guillotine. Until a mysterious man breaks her out of her cell and takes her on a goose-chase to cure his Prince…

The sight of a crudely drawn map of a fantasy continent is sure to bring at least a few people to revolt. In some respects, they’d be right- the Tolkien-esque drawings are often as unhelpful to the reader as a football was to, say, Shakespeare (at least, I don’t think he was a footballer), particularly when they greet you with tens of hastily-imagined fantasy names. Touch of Power sports such a ghastly map; though, as I always do, I ignore it, choosing instead to savour the story than to dwell on the geography of a continent I will only ever stray across in my dreams, day or night.

Snyder makes the unusual choice of a first-person narrative, something that is rarely seen in fantasy epics, though perhaps not as rare as having a female protagonist rather than some blonde, fifteen year old or an arrogant hunk. For those more fantasy-wary of the female species, I suspect an intelligent, sure female lead will ease the aversion- and as for us guys, well, we can’t complain.

When you’re a serial fantasist such as Maria V. Snyder, you’re expected to be good at what you do. In two words: she is. In five: there is room for improvement.

At first sight, Touch of Power has everything to start a strong fantasy series: a relatable, intelligent, moral and caring protagonist, a good premise that isn’t bogged down by gross detail as some other fantasy stories are and tight pacing that keeps everything together and exciting. And, most importantly, the romance is teasing and gradual.

So where does the “room for improvement” come from?

First and foremost, it has to be said that Touch of Power is a entertaining and enjoyable read which isn’t bogged down by fifteen year old fantasies or page-long descriptions of magic and wondrous cities. Touch of Power is a good book; and therein lies the problem. The potential of the novel is greater than what it is.

I always like to say that it is the imperfections that make a novel; the tiny flaws in the characters and the plans that don’t go to plan that bring life rather than endless perfection. Into that idea is rooted Snyder’s problem: Avry is just a little bit too perfect. Never does she complain that she suffers endlessly when she heals people and takes upon herself their wounds, never does she despise herself because of her gift. Snyder just doesn’t delve deeper into Avry’s thoughts or give any explanation whatsoever apart from that Avry is a wonderfully compassionate and moral person, which isn’t an explanation at all.

Touch of Power is a good book. My disappointment isn’t that Snyder wrote something awful: it’s that she could have done so much better. In an oft male dominated genre, a female touch is a breath of fresh air: cutting out the unnecessary fetishes for fantasy that some male writers have and cutting to the heart of the matter: the characters. Though the story is exciting, the focus is always on the characters, and this makes Touch of Power increasingly relatable. My only hope is that Snyder explores Avry in greater detail in the sequel that was promised in the last pages of the novel.

More in the Avry of Kazan: