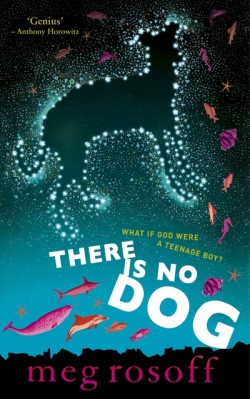 Published: 2011, August by Puffin Books
Genre: fantasy Age: 13+
Synopsis: In the beginning there was Bob. And Bob created the heavens and the earth and the beasts of the field and the creatures of the sea, and twenty-five million other species including lots and lots of gorgeous girls. And all of this, he created in just six days. Six days! Congratulations, Bob! No wonder Earth is such a mess. Imagine that God is a typical teenage boy. He is lazy, careless, self-obsessed, sex-mad - and about to meet Lucy, the most beautiful girl on earth. Unfortunately, whenever Bob falls in love, disaster follows. Let us pray that Bob does not fall in love with Lucy.

The Bible got it right; but only partially. In the beginning was God. Well, Bob, actually. He’d been hired to create a new planet. So he did: he separated earth and sea and sky, and planted stars up above and plants in the ground. He created animals; fish, birds, mammals, reptiles. All sorts of things. But Bob’s greatest creation was humankind. He made them in his own image. And he fell in love with them. A recipe for disaster? Hell yes.

There is little doubt that the people at Penguin, responsible for publishing Meg Rosoff’s latest novel, were hoping for a somewhat controversial bestseller: titled There is No Dog (Dog is God spelled backwards- get it? Yeah, it’s not funny and has absolutely nothing to do with the novel) the novel is based upon the notion of God being a teenage boy. However, there is little controversial about it; Rosoff doesn’t slam Abrahamic faiths like Pullman did so heavy-handedly in His Dark Materials, doesn’t ridicule people for believing such things and most importantly of all, seemingly didn’t scoff whilst she wrote There is No Dog. The idea is a perfectly valid and splendid idea full of potential. The faux-controversial drivel of the marketing department isn’t.

There is No Dog surprised me; rather than being a more serious, unflinching representation of Rosoff’s beliefs, it verges on the fairy-tale and fantasy genres to produce quite a light yet abstract read that makes it suitable for readers of younger ages as well as older teens such and adults. Bob is a somewhat irresponsible, hopeless, and for want of a better word, horny, deity. Under the guidance of Mr B’s hand, Bob began a somewhat marvellous creation but since those six days (and not forgetting the rest day after), Bob has been a little neglectful from his planet, instead falling in love with beautiful immortals and ruining the planet as those relationships eventually lead to break up and some catastrophic natural disasters.

I should think it be quite hard for Rosoff to pull of a typical teenager when a lot of teenagehood is dominated by day-to-day things such as school, which Bob himself, of course, doesn’t experience, but done it she has, injecting more than a little spontaneity into the titular character. Bob is all over the place, quite literally: one moment a hopeless romantic, the next angry, pissed-off and lazy. In that sense, he is easily relatable. However, I had some trouble connecting with all the characters fully. Though I empathised with the situation, I struggled to emotionally invest myself to any great degree. Partly, I think this is due to the abstract nature of the novel: there is little sense of “real life”, even for the mortals, with which I can relate my own experiences. And the Eck? I was somewhat perplexed how he/she/it was relevant, and though cute, I felt was rather redundant.

Rosoff’s greatest downfall is her almost complete and utter disregard for any plotting. I was left continually wondering where Rosoff was going to take There is No Dog, and this lack of direction also lead to a lack of patience with the novel. And though Rosoff reaches a philosophical climax, there is little else to signify the culmination of the novel: things just seem to run in circles: the end of the novel could as well have been the beginning or middle.

Rosoff is no Douglas Adams and There is No Dog is no Hitchhiker’s Guide; the novel relies more in its conceptual basis than execution to deliver entertainment and chuckles. There is No Dog is strictly only for those who can exercise a little patients with the plot, but even then don’t expect it to be more than a light, slightly amusing read. Try it if you’re intrigued; otherwise, let it pass.

What did you think about There is No Dog?