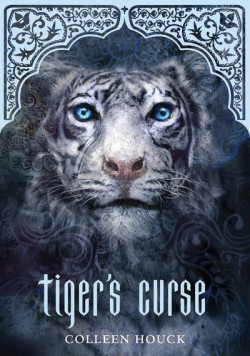 Published: 2011, January by Hodder
Genre: adventure, fantasy Age: 12+
Synopsis: Would you risk it all to change your destiny? The last thing Kelsey Hayes thought she'd be doing this summer was trying to break a 300-year-old Indian curse. With a mysterious white tiger named Ren. Halfway around the world. But that's exactly what happened. Face-to-face with dark forces, spellbinding magic, and mystical worlds where nothing is what it seems, Kelsey risks everything to piece together an ancient prophecy that could break the curse forever.
Watch the book trailer

Kelsey needs a summer job. Is she going to stack shelves in a supermarket? Serve fries at McDonalds? No, she’s going to go work in a circus and look after a Tiger.

During her placement, a man visits the circus and offers to buy Ren the tiger and transfer him to a nature reserve in India. He asks Kelsey to travel with him as she has experience working with Ren, but as soon as Kelsey gets to India things take a turn for the unexpected. Kelsey is abandoned by those she’s meant to be working with and left alone, lost, in the jungle. Luckily Ren’s able to explain things to her. How you ask? Because Ren is no ordinary tiger, he is a three hundred year old Indian prince who, having had a curse placed upon him long, long ago, is now only able to return to his human forum for 24 minutes within every 24 hours.

Kelsey eventually agrees to help him go about breaking the curse and together the pair travel around India, looking into the prophesies made that might concern Ren’s fate, and trying to find the items that might return him to his original self.

The only other books I’ve read that have been set in India have been Rohinton Mistry’s A Fine Balance and Salman Rushdie’s Midnight’s Children, both of which focus on the partition of India and both of which are thus quite harrowing. Reading Tiger’s Curse was a breath of fresh air in that it explored a more light-hearted side of India. It was a really fun mix of the magic associated with old Indian mythology and the bright and exciting idea of modern India.

Tiger’s Curse had a good set of characters and the relationships between them were built up quite strongly. Even smaller background characters, such as Kelsey’s foster parents, had unusual and interesting qualities to them that gave them depth and humour.

The only faults with this book were that it was quite linear and the plot occasionally felt strained. Elements of it seemed to contain the video game idea of ‘you are the chosen one, now collect a certain amount of magical things’. And although I started out really liking the main character Kelsey, towards the last hundred or so pages, her insistent blindness and her stubborn, obvious mistakes, had me tearing my hair out.

However although there weren’t really very many twists to it, and the story felt like a single thread rather than a woven plait, that said thread was enjoyable. Tiger’s Curse really is, above all, an adventure tale, allowing you to explore circus life, a bright India and mythical, magical worlds of Colleen Houck’s own creation (her magical worlds were really outstanding, definitely my favourite part of the book!).

So if you want to want an adventure, to travel to amazing places full of magic and mystery, pick up Tiger’s Curse.

What did you think about The Tiger’s Curse?

More in the Tiger Saga: