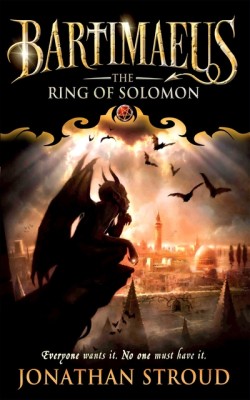 Published: 2010, October by Random House
Genre: fantasy Age: 12+
Synopsis: Fans of Jonathan Stroud's Bartimaeus books will devour this book - a cracking adventure brimming with magic, intrigue and a treasure trove of characters that the reader can't help but fall for. We find everyone's favourite irascibly insolent djinni serving at the court of King Solomon in 950 BC Jerusalem, where he is causing his customary chaos and must help a girl assassin sent by the Queen of Sheba to steal the all-powerful Ring of Solomon. The comic relief is perfectly timed, the dialogue sharp and snappy and the fiendishly clever plot perfectly handled with Jonathan's trademark flair and command of language. Thrills, chills and a danger-spiked finale - this is one of the publishing events of the year.

In this long-awaited companion to Jonathan Stroud’s Bartimaeus Trilogy, Bartimeaus returns as he relives one of his greatest conquests. Readers are taken back in time, to a Jerusalem ruled by the Great King Solomon, the greatest magician history had ever known. Enslaved by one of the King’s most powerful underlings, everyone’s favorite djinni is forced to cope with his brutal master, his fellow slaves, and the sinister presence following his master. Asmira, guard to the Queen of Sheba, leaves for Jerusalem for one reason and one alone: to kill the all-powerful King of Jerusalem and to bring his ring, rumored to be capable of calling up the greatest powers of the Other Place, back to her beloved Queen. Soon, Bartimaeus finds himself caught up in far more than he can handle – but hey, we’re dealing with Bartimeaus here. What can’t a little wit now and again fix?

So! By returning to Stroud’s ingenious alter universe, where magic and powerful spiritual entities are all too real, we of course get to see our favorite djinni once again – Bartimaeus! In my opinion, he is really one of the best written characters out there. He’s sarcastic, egotistic, and downright silly most of the time; what’s not to love? But then his deeper thoughts are just as interesting as his sense of humor. He really is one of my favorite characters in the fantasy genre. But of course, we have other characters as well – in The Ring of Solomon there are multiple protagonists, just as there were in the Trilogy. Nathaniel isn’t born yet, though, so who do we have instead? The loyal and skilled guard to the Queen of Sheba, Asmira, who is sent on what is basically a suicide mission to save her Queen and her homeland. Which she sets off to accomplish quite readily, might I add. I enjoyed her character quite a bit, actually (not quite as much as I loved Bartimaeus, but hey, that’s hardly surprising for me). One of the main things I loved about these two together is the kind of symmetry between the two, as well as the way Bartimeaus really instigates the transformation in her character as she struggles with unforeseen dilemmas and learns to think for herself. It was nearly as good as the relationship between Bartimeaus and Nathaniel from the previous books, which I really wasn’t expecting, seeing as we had three books to build their relationship and only one to establish the bond between the djinni and Asmira – but it developed really well, and I was pleasantly surprised.

Of course we have antagonists as well; Farqual makes a comeback, which was just awesome to see (read?), and we’re introduced to Khaba, a ruthless slave-driver who probably has a black abysmal hole in his chest instead of a heart. I enjoyed Farqual’s part in the story as always, and Khaba was a perfectly despicable villain. But the most hateful character for me? Definitely Ammet, servant and obsessive follower to Khaba. I didn’t like the fellow. At all. Though I really did enjoy unraveling the mystery around Khahba’s supposed “shadow” and all of Ammet’s confrontations with Bartimaeus. But in this case, the servant really was much more awful than its master, I think, which was really great writing as well on Stroud’s part. To top it off, King Solomon was a figure I was really excited to see develop through the book’s pages, and I was completely satisfied with the way his character was written as well. I really do love Stroud’s characters, they are one of the strongest components of Stroud’s works.

The plot itself was great as well, though maybe a touch more predictable than the previous pieces from Stroud that I’ve read. Or perhaps it was just less complex, being that The Ring of Solomon is somewhat shorter than the others. Still, it was involving on the part of the reader – as was the case with The Bartimaeus Trilogy and The Heroes of the Valley, I snickered, I felt for the characters, and I was pushed to the edge of my seat. Often times all at once.

One of the greatest things about these books, I think, is the use of footnotes to better express the different levels of thoughts experienced by Bartimaeus. Not to mention the fact that they’re hilarious and one of the most interesting parts of the novels themselves. They serve as one of my favorite things about Stroud’s writing – I mean, who would think to use footnotes like that? Oh, and I always loved the split perspective aspect from the Trilogy as well, and seeing it make a comeback in this novel was great. It helps to offer a view from both sides of the spectrum, after all, and I think I really helped the movement of the story and the development of its characters. And for me, the way historical figures or events (such as the tale Solomon’s ring, as well as Solomon himself) are inserted and altered in these books. It’s an aspect of Stroud’s tales that makes them really interesting for me.

Looking back, I really have no overwhelming issues with The Ring of Solomon. I loved every second of it, actually. The only bone I can find to pick in this case was maybe the first few chapters of the book. One thing I’ve noticed with the beginning’s to Stroud’s series is that they can sometimes start off a bit slow – people may lose interest there, though honestly, I challenge you to get five chapters in and still put this book down. It’s impossible.

On the whole, The Ring of Solomon is a worthy companion to The Bartimeaus Trilogy. It delivers all that I was expecting it to and more, providing the reader with amazing characters, an interesting and involving plotline, and much more. It’s just an awesome, more modern spin on the fantasy genre and I would most definitely recommend it to anyone, and one of the great things? I really don’t think you even have to read the Trilogy first. You could go read them right now! Isn’t that exciting?

More in the Bartimaeus Quartet: