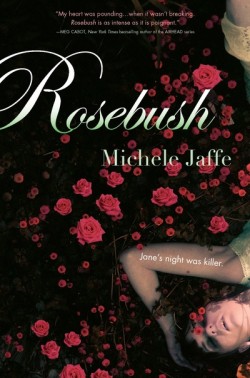 Published: 2011, March by ATOM
Genre: crime, romance Age: 14+
Synopsis: Jane is found, near death, in a rosebush ? a victim of hit and run. But as she's convalescing she realizes that her friends' stories and her memories of what happened that night aren't adding up. And now the only thing she does know is that one of her friends isn't so friendly. One of them tried to kill her. Sometimes the truth is a very thorny thing...

One minute Jane is at a party. The next, she is left for dead on a street. Stuck in a hospital, Jane must piece together her gradually returning memories and find out who wanted to kill her. Was it her boyfriend, David, who can be moody at times? Or his friend, Ollie, who Jane doesn’t get on with? Or Kate, or Langley, her two best friends? Or was it Joe, her mother’s boyfriend? She will find out – but only gradually – and it’s a lot more complicated than she thinks…

Being a guy, I was reluctant to read Rosebush when I received it from Atom Books; the cover seemed to really emphasise the feminine side of it – but Kate, one of the lovely girls at Atom, convinced me; mainly because this isn’t your normal chick-lit. It’s got a who-dunnit twist, and a very good one at that.

Reading it from a guy’s perspective, it’s obviously been written for girls. Everything from the title, to the cover, to the actual story is permeated with make-up and fashion, particularly the beginning. Eighty-five percent of the characters are girls. I don’t think I would have enjoyed Rosebush if it hadn’t been for the fantastic crime-spin. For many guys, Rosebush is probably a little too feminine, but for you ladies, you will love this. Everything from the writing style to mystery, Rosebush is a book that will enthrall anyone who touches it.

The characters are the only thing that leave a lot to be desired, because most of them are quite flat. Pretty much all of them are rich. And most of them are perfect, particularly towards the start before their darker sides are revealed. I suspect that Michele Jaffe wanted the main three to be “rich bitches”, and I would have been fine with that had there been a little more character development. While numerous flaws are pointed out throughout Rosebush, they still seem glossy and fake. The guys are also a bit too good: nearly all the guy leads are good looking, almost too perfect to be true.

The story makes up for it all, and more, however. Right from the start, Rosebush is captivating, and I could never guess who had commited the crime. Every few pages I had a new hunch. At one point, I was so involved with the story that I nearly drew up a table of all the incentives the different characters had for wanting to kill Jane! The way Michele Jaffe has incorporated this almost-murder-mystery spin is fantastically successful because it’s so involving. It’s also a great way to drive Rosebush. It’s incredibly hard to put it down. Rosebush is the very definition of a page turner.

As always, what brings everything together is the prose: how it’s been written. Rosebush is told in first person, which makes it very involving – and it’s also beautifully written. There is no doubt that Jaffe is a great author. The only parts that bothered me were the flashbacks – Rosebush is eighty percent flashback – and while they were written well, it was sometimes confusing when Jane was flashing back, as it wasn’t always formatted in an obvious way. This was particularly the case of flashbacks that were several deep – where Jane would tell us about a time when she was explaining something else to others.

I was certainly apprehensive about reading Rosebush – I’ve never been much of a fan of chick-lit, but having finished it, I can say it’s been worth it – incredibly so. Guys in my year might have given me one or two odd looks while I’ve been reading this(!), and it’s certainly a girls’ book, but the story is so gripping I could hardly stop reading. Rosebush is a book that will keep you guessing until the very end, and will have you reading at every spare moment.