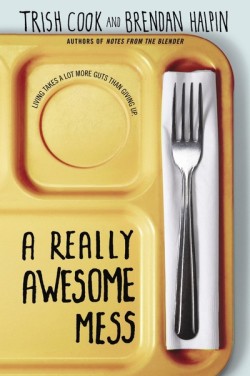 Published: 2013, July by Egmont
Genre: bildungsroman Age: Never
Synopsis: Heartland Academy seems like the least likely place to make really good friends, particularly when everyone there has an issue of some kind to contend with. Emmy and Justin face an eating disorder and depression respectively, but as they build their friendship they find that they haven't lost their hope in each other or their sense of humour - important, seeing as laughter is the best medicine. Trish Cook and Brendan Halpin are seasoned YA veterans who bring their expertise of humour and emotional nakedness to their characters.

It’s not the first time that a novelist (in this case, two novelists) has tried to write about teenagers with serious problems in a rehab environment in a way that is both funny and profound. In fact, authors seem to be drawn to rehab scenarios just as fruit flies are to, well, fruit. Understandable, perhaps – characters with problems are not only interesting to write about but also engaging characters that allow authors the opportunity to celebrate the highs and lows of the human condition with as much vigour as teenagers have mood swings. A Really Awesome Mess is no different.

There is, of course, one danger to the popularity of the setting: more often than not (too often, in fact), authors don’t know what they’re talking about and some serious damage is carried out. We mustn’t forget: the problems teenagers sometimes have are real, and they can also be serious. That means that you also need to treat your character’s issues with the same seriousness. Not doing so patronises real people with real conditions and falsely informs people who (luckily) don’t have mental health issues.

That doesn’t mean your book has to be deadly serious 100% of the time; it doesn’t. It just means you have to know when you can have a laugh and when you can’t. Sadly, authors Trish Cook and Brendan Halpin don’t, and that makes A Really Awesome Mess an incredibly dangerous novel, promoting unrealistic ideas about mental health issues such as anorexia/bulimia, depression, selective mutism et cetera and cultivating inappropriate attitudes. Take the therapy situation, for example, at “Heartland Academy”. It is completely absurd: not only do the therapists have no control (the teenagers seem to be able to get away with anything), but they also force-feed their anorexic patients. That’s right. They force everyone, including those suffering from bulimia and anorexia, to consume 3,000 calories a day. For a start, that’s physically impossible – you can’t suddenly go from eating nothing to eating (I’ll say it again) 3,000 calories – but more than that, it’s perverse, backward and wrong. Force feeding anyone with an eating disorder is more likely to worsen their situation, not improve it. You don’t need to be a healthcare professional to know that. And the worst thing? Cook and Halpin treat it as if this is normal practice that works. There is no authorial commentary that makes it clear that “Heartland Academy” is promoting grossly inadequate practice, or that somehow it is an ineffective rehabilitation centre. Nothing. Nada. More than that, though, is that the authors use substance abuse, eating and mental disorders as jumping points for jokes.

Even without the terrible irresponsibility on behalf of the authors and publishers, A Really Awesome Mess still doesn’t make the cut. Even at a basic level, Justin and Emmy’s alternating narratives are indistinguishable, which suggests that having two narrators is superfluous. Furthermore, the novel lacks raw, emotional interest; at all times it felt a little too easy and clean and didn’t explore the deep pits of despair the characters were supposedly feeling. And without the ‘really awesome’? It’s just a mess. And dangerously irresponsible publishing.