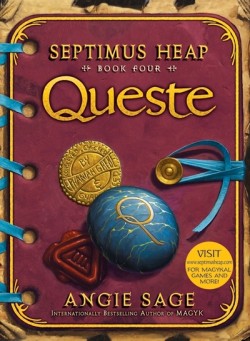 Published: 2008, May by Bloomsbury
Genre: high fantasy Age: 9+
Synopsis: Septimus faces a perilous quest to find Nicko and Snorri, who have been trapped back in time. Everyone at the Castle is realising that Nicko and Snorri's chances of coming back are slim. Septimus, aided by Alchemist Marcellus Pye, learns of a place where all time meets: the House of Foryx. But how does he get there? Jenna and Septimus find Nicko's notes from the past and discover that he knows of the House of Foryx as well and has been creating a map to plot the house's hidden location. With the help of the Questing Stone and Nicko's faded maps, will Septimus be able to save Nicko and Snorri? Meanwhile, Simon Heap has taken on Merrin Meredith, former apprentice to DomDaniel, as his own apprentice, giving Merrin an opportunity he has been waiting years for. With the help of a frightening creature called a Thing, Merrin plans to reclaim the identity he used to have that of Septimus Heap.

Nicko and Snorri are trapped in a time 500 years before that of their own time. The only hope for them is to be rescued by someone from their time; and even this is highly dangerous, with a risk of being timeless for eternity. But there are some who are going to rescue them. They must get past people who are on a mission to kill them, dangerous Questings and desolate surroundings. Getting to the House of Foryx is hard on its own. Getting there when you are on the verge of assassination is nigh impossible…

Now on its fourth installment, Septimus returns to the magykal world seen in the previous three books. Queste is, up to now, the longest book in the Septimus Heap series, but not necasserily the best.

The first 50 pages are, once again, a weakpoint of Queste. We don’t see Jenna or Septimus in that time, and I certainly felt that I wanted to see what was up with them, although those fifty pages are a setup for the plot that follows. I also found that Queste seemed unusually cluttered with unrelated story lines, particularly of Merrin, who we see a lot of in the first half, but who hasn’t got an important role or is even related to the main story arc. I think perhaps Angie Sage could have cut those elements, and got straight to the main story, although I think perhaps they are a setup for the next book.

Although, saying that, I did enjoy Queste. It is something slightly different from the previous three books in that they aren’t fighting a villain, like in a classic fantasy story, but that they are on a Queste.  I quite liked it in that sense: I think, had we got another good guys vs bad guys, it would have seemed forced and slightly repetetive.

Undoubtably, Queste carries on the slightly darker and more complicated plot line that featured in Physik; this makes it enjoyable for both younger readers and people like myself.

In Queste, we get to see Camp Heap again, and see more of Septimus’ brothers personalities; which we haven’t before. I found it to be quite accurate and amusing to watch that wherever you are, 17 year olds are just the same, even in fantasy worlds…

We are also introduced to another few characters, who are really enjoyable to read about. It is a shame that we probably won’t see them again. I won’t reveal who they are though; that is for you to find out!

In the last fifty pages, Queste really becomes its own. Those last few pages are well worth reading, and they have a plenty of action and tension. I wouldn’t have minded if Angie Sage had extended those events, and allowed us to indulge ourselves in them. It is well worth reading the sometimes rambling plot just for the climax, although the rest of Queste is enthralling too.

For the fourth time now, Angie Sage has once again given us an enthralling and enjoyable read, with that writing style that is so indulging and enjoyable.  And although it isn’t my favourite In the series, it certainly us up there.