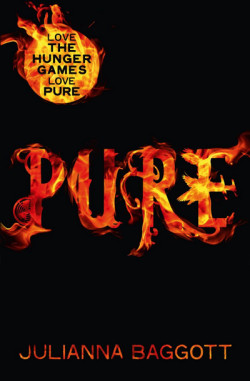 Published: 2012, February by Headline
Genre: dystopian, post-apocalyptic Age: 13+
Synopsis: We know you are here, our brothers and sisters. We will, one day, emerge from the Dome to join you in peace. For now, we watch from afar. Pressia Belze has lived outside of the Dome ever since the detonations. Struggling for survival she dreams of life inside the safety of the Dome with the 'Pure'. Partridge, himself a Pure, knows that life inside the Dome, under the strict control of the leaders' regime, isn't as perfect as others think. Bound by a history that neither can clearly remember, Pressia and Partridge are destined to forge a new world.
Watch the book trailer

Outside of the Dome life is hard. There is little food, electricity or running water. It has been this way since the Detonations shook the world. But life goes on and Pressia Belze is struggling through the harsh wasteland to care for herself and her grandfather. What she doesn’t know is that she is part of far bigger- something that existed even before the Detonations. Her history will unravel with that of the boy, Partridge, who lives in the Dome, though they have yet to know each other…

Julianna Baggott’s Pure is more of a post-apocalyptic tale than that of a dystopian society, mainly due to the fact that there isn’t much society left. The little that does exist is trapped inside the Dome, a sanctuary for those who were chosen to survive when the Detonations began. Those who weren’t lucky, well they’re fused with household items- cars, dolls, glass… anything that they were holding when the bombs went off and destroyed their lives with unimaginable ferocity.

Pure capitalises on a concept that has been visited by many authors, particularly in the sci-fi genre. The greatest threat to this hefty novel is the risk that some readers will dismiss Pure as another derivative, post-apocalptic/sci-fi novel that isn’t worth the paper it is printed on – but it is very much the opposite in this case, and Pure pushes past this hindrance with little effort. Anyone who reads the first line will know that Pure is worth reading, regardless of if you’re a fan of post-apocalism in novels or not.

While Pure may be a relatively chunky novel, it does not cover a particularly large story arc (which is highly accomplished in its own right). Instead, much more time is devoted to the frankly beautiful, poetic language that Julianna Baggott utilises to create her world. Her words paint atmospheric pictures of unsquashed beauty amongst the dirt and grime of a destroyed and broken world. I envy the artist who is to produce a cover for this wonderful novel; the text is so rich and full of inspiring pictures that it won’t take a lot of imagination to create a beautiful jacket.

On top of the stunning prose, Baggott also populates her novel with a multitude of fascinating and gripping characters. Even the very minor ones, which are present for only a few pages, are captivating. It is not often that a sci-fi/post-apocalyptic novel that arrives has such a high standard of characters. Pure is one of the few where each and every one is unique, original, and well thought out.

All of these things come together to create a book that is better than many a novel. Pure manages to be more than the post-apocalyptic novel it is advertised to be; it is violent, yet touching, nightmarish yet beautiful, gritty yet delicate, faded and yet vivid. It is an amalgamation of genres, the sum of which is greater than any one of its wonderful parts. Julianna Baggott has written a novel that is bigger and better than its counterparts- one that will reward multiple readings. But most of all, Pure is unforgettable. Only one question remains: when will the sequel be released?

What did you think about Pure?