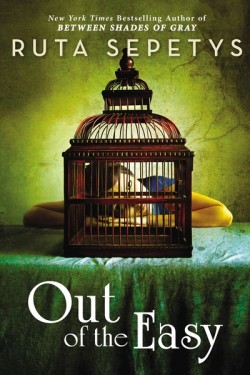 Published: 2013, May by Penguin
Genre: bildungsroman, historical Age: 14+
Synopsis: Out of the Easy is set against the vivid backdrop of 1950s New Orleans. Written by New York Times bestselling author Ruth Sepetys, this novel has something for everyone: love, mystery, murder, blackmail and warmth. Josie Moraine wants out of The Big Easy - she needs more than New Orleans can offer. Known locally as a brothel prostitute's daughter, she dreams of life at an elite college, far away from here. But then a mysterious death in the Quarter leaves Josie caught between her ambition and a clandestine underworld. New Orleans is luring Josie deeper in as she searches for the truth, and temptation beckons at every turn.

We’ve got a fantastic interview with Ruta Sepetys herself which you can watch here – it’s awesome and she talks about Between Shades of Gray, Out of the Easy and her next project!

What do you do if your mother is a prostitute and makes your life a misery?
You run. You run as fast and as far as you can, dream higher than any skyscraper and hope, wish, that beyond the warm, summer, jazzy streets of New Orleans there is a life for you. This is Josie Moraine’s dream. A dream of a life beyond.

Hot on the heels of her debut novel, the harrowing yet hopeful Between Shades of Gray that brought awareness of Stalin’s Purges to a whole new audience, Ruta Sepetys is choosing to set her new novel in a world far from Communist Russia: fifties’ New Orleans or “The Big Easy”. Nothing is easy about it, though; instead of Stalin’s genocide there is crippling gangster activity that permeates every layer of society and ensnares even the most unwilling and innocent. But unlike Between Shades of Gray, which was a story that needed to be told, Out of the Easy is a novel with a very different tone and intention. The struggles of a teenage girl, however, are still at the heart of the novel, and Sepetys is more than capable of reproducing the emotional roller-coaster that made Between Shades of Gray such a hard-hitting read (though you’ll be pleased to know there is significantly less human rights abuse.)

The worry is, of course, will Out of the Easy have the same successes, both commercially and as a medium of entertainment, as Between Shades of Gray? Even as a reader, there is the all-too familiar niggling feeling on opening a favourite author’s new novel which asks, will this be as good? In the case of Out of the Easy, I was more preoccupied with Sepetys’ characters, who make up the core of her novels. Would Josie be as relatable and empathetic as Lina, who became transcended the novel and became a friend to me? But I needn’t have worried: Josie grew on me very quickly. By the end, she’s an old friend, someone to laugh with and weep with, someone you can’t bear to say goodbye to; perhaps more so than Lina, as Josie’s plight is a far more personal one.

Out of the Easy is a novel of Josie’s coming of age, a time of self-discovery in which she comes to realise who she is and what she stands for, consciously carving her own path through life in a direct protest to the way her mother lives. This novel is about her struggles, and how she overcomes them with the support of a loyal and caring group of people – and how life in the 50s wasn’t so different from now.

Josie isn’t alone: she’s surrounded by a multitude of wonderful characters who, if Sepetys wished, could all be central characters of their own books, their own passions and pitfalls the narratives. There’s Willie; a brothel madam who is more of a mother to Josie than anyone else; Patrick, a twenty-year-old bookshop owner who has his own secrets and passions and Jesse; motorcycle Jesse who is always there for Josie, even though she may not know it all the time. Add to that Cokie, Willie’s driver, who believes in her more than she does herself, and you soon come to realise that Sepetys is a masterful writer, lending even the smallest of characters their own history and struggles.

Out of the Easy may not be as important a work of literature as Between Shades of Gray – Josie’s plight isn’t that of millions of Eastern Europeans during the Purges – but it is just as hard-hitting, delivering emotional highs and devastating blows like few other novels. This is not a novel to read in-between times but a novel to consume in one evening, a novel whose characters will live on longer than the pages they are written upon, a novel that, above all, shows us that nothing is more important than having high hopes in life. Dammit Ruta, you’ve done it again.

What did you think about Out of the Easy?