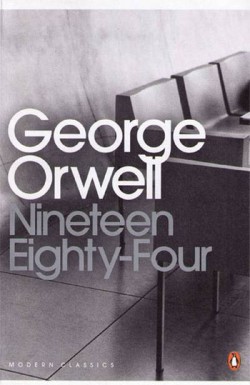 Published: 1948 by Penguin
Genre: classics Age: 15+
Synopsis: Hidden away in the Record Department of the sprawling Ministry of Truth, Winston Smith skilfully rewrites the past to suit the needs of the Party. Yet he inwardly rebels against the totalitarian world he lives in, which demands absolute obedience and controls him through the all-seeing telescreens and the watchful eye of Big Brother, symbolic head of the Party. In his longing for truth and liberty, Smith begins a secret love affair with a fellow-worker Julia, but soon discovers the true price of freedom is betrayal.

But Winston does not: at least not whole-heartedly. It can only be a matter of time.

There are two ways in which to judge Orwell’s 1984: as a novel and as an exploration or extended/narrative essay. As the former, it invariably fails- offering little more than a linear plot and relatively un-inviting characters. As the latter, it is a great success: exploring freedom, justice and control through the totalitarian rule of Big Brother and the government of Oceania.

1984 is often considered as the father to all modern/contemporary dystopian writing; but in fact, there is scarce similarities between Orwell’s 1948 novel and modern or even young adult counterparts. Many people consider themselves to know it even though they have not read it, and reading it may in fact shatter your delusions of the novel as it did mine. That is, if you can get into it.

Few things could be duller than the internal monologue of Winston Smith that dominates the first third or even half of the novel. Very little, if anything, happens except for the inconsequential motions that Winston goes through before acting on his ideologies and subverting the Party. This is, as a novel, 1984‘s greatest failing: I had nearly given up before anything had even begun, and I suspect many others had too. It was only because of 1984‘s distinct reputation and the fact that I felt that I could not NOT have read 1984 that I carried on reading. And it’s good that I did: once Orwell introduces a few more characters and powers up the plot with actual happenings and political message things do get interesting- particularly the political side of things, which is what 1984 seems to have been written for.

In the end, the purpose of the narrative is to serve the political theory within the novel: the characters are created to explore totalitarianism, capitalism and other political ideologies and beyond that, both characters and plot are irrelevant. The plot, Orwell sets out from the beginning, and the characters are presupposed to their destinies. To come full circle: as a novel, 1984 is a failure. As an exploration of politicism, it is a great success. A basic and fundamental interest and understanding of politics is essential to read 1984: anyone else will simply find it dull.