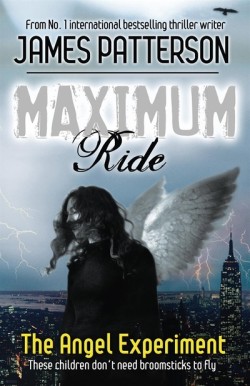 Published: 2006, April by Random House
Genre: fantasy, sci-fi Age: 12+
Synopsis: WELCOME TO MY NIGHTMARE Do not put this book down. I’m dead serious – your life could depend on it. I’m risking everything by telling you – but you need to know. STRAP YOURSELF IN for the thrill ride you’ll want to take again and again! From Death Valley, California, to the bowels of the New York City subway system, you’re about to take off on a heart-stopping adventure that will blow you away... YOUR FAITHFUL COMPANIONS: Max, Fang, Iggy, Nudge, the Gasman and Angel. Six kids who are pretty normal in most ways – except that they’re 98% human, 2% bird. They grew up in a lab, living like rats in cages, but now they’re free. Aside, of course, from the fact that they’re prime prey for Erasers – wicked wolf-like creatures with a taste for flying humans. THE MISSIONS: Rescue Angel from malicious mutants. Infiltrate a secret facility to track down the flock’s missing parents. Scavenge for sustenance. Get revenge on an evil traitor. And save the world. If there’s time.

Maximum Ride is not your normal 14 year old girl. Apart from the fact that she and the rest of the ‘Flock’ have wings and other superhuman-abilities, they also live on their own and survive attacks by other mutant creatures: Erasers, who just like the Flock, were reared in animal cages in a lab. And these half man half wolf people have a taste for flying humans…

Maximum Ride – another series I read a couple of years ago and have picked up recently. I can’t say a lot about first impressions; two years is a long time, but what I do remember is that I was hooked right from the beginning. I realise, re-reading The Angel Experiment, that the prologue is a bit cliché and cheesy; the whole read-this-and-don’t-put-it-down thing has been done many times before. But in a first-person account, I guess it’s necessary to introduce you to the narrating character. After the short prologue, it’s straight into the action-packed, slightly sarcastic and witty adventure that fans know the series is.

The characters, at first glance, seem like pretty ordinary teens and tweens; but I guess that’s what they’re meant to be. Max(imum) is the witty titular character, and she does entertain well. James Patterson has done well in portraying Max, as well as the rest of the flock. Ari, however, I was not so sure about. I felt his character was underdeveloped, and much of his character relates to backstory, so as a reader you don’t really feel as sorry for him as you should. The kidnapping of Angel is similar – the rest of the characters get really emotional, but the reader just isn’t there because we barely know Angel. It seems quite hard to relate to the Flock at that point.

The story itself is a great thing. There’s plenty of action, which is great, and it’s just a thrilling read. There isn’t really much if a plotline- as it is with pretty much all the Maximum Ride books- but this doesn’t matter. In some ways, this is both the life and the death of the series/book; without a clear goal to reach, the book just ambles on, which is great because it means it’s full of surprises, but is also bad because it doesn’t really have a focus.

If you’ve ever read any if the Maximum Ride books, you’ll quickly notice the length of the chapters- very short! I’m not sure why this is- I’m assuming it’s a pacing decision made by the publishing house- but it didn’t really bother me. It chops the book into nice, short chunks, that when put together flow really nicely, but you can stop and start easily, which was great because I was reading this in quite a few places, bits at a time.