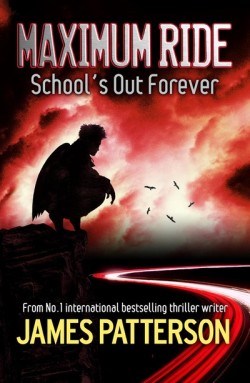 Published: 2007, April by Random House
Genre: fantasy, sci-fi Age: 12+
Synopsis: If you’ve already experienced MAXIMUM RIDE: THE ANGEL EXPERIMENT, stop right here – just turn the page, and hold on tight! As for the rest of you – meet Max, Fang, Iggy, Gasman, Nudge and Angel; six unforgettable kids (and a dog). With some major problems. THEY’RE BEING HUNTED BY KILLERS. BUT WHO? AND THAT’S NOT ALL! Max is sure that a microchip’s been inserted under her skin – bringing evil forces to ambush them at any moment. Oh yeah, and they’re supposed to save the world. BUT FROM WHAT? WHEN? AND HOW? Max will stop at nothing to find answers. One thing she does know: it’s got something to do with an astonishing ability they have. THEY CAN FLY. Max’s heart-stopping quest to protect her ‘family’ and investigate the mind-blowing mystery of her destiny continues in the scariest, strangest, and funniest James Patterson thriller yet.

Finally, Max and the Flock are settling down, leaving reasonably normal lives. It’s been the longest time they haven’t had to run since Angel was abducted, and the peace and quiet is being enjoyed by everyone. Only Max doesn’t quite trust it, and with good reason. Why would all Eraser attacks suddenly stop? Unfortunately, it’s too late now….

Maximum Ride: School’s Out Forever; the second book in the ever popular series, and one of the best, in my opinion. Carrying on the same high-octane adventure, this book delves further into the mystery of The Angel Experiment, and we’re still left wanting to know why the Flock was created, what this ‘saving the world’ thing is about and why Max is so important.

Most, if not all the characters get worked on, and plenty of things happen to change the dynamics slightly. I was glad to see some mental break-downs happening; realistically, I’m sure that would happen. Ari’s character has been greatly improved, and it’s nice to see some of his motives, as odd as they are. It isn’t quite convincing, and in my opinion still needs some work, but it’s a much needed improvement.

The story, as with all the Maximum Ride books, just ambles on at its own pace, without proper direction or focus. There may be a long term aim: ‘to save the world’, whatever that means – but not a lot has happened in that department, and we’re left as confused as the Flock. Some revelations soon would be nice… Otherwise, the story is pretty cool; there are some action-packed events , and it’s funny to see the Flock in a ‘normal’ situation. The double Max thing – you’ll know what I mean once you’ve read the book – is pretty nifty, although how it’s pulled off isn’t. Both Maxes portray the book chapter by chapter, and it just gets confusing as to which Max is really telling the story and when.

The one thing that kinda annoys me though, throughout all the books, are the Erasers. I failed to mention these in my last review, but they spoil the realism of the book quite a bit. I can suspend my disbelief for long enough to believe in bird-kids, but when it come to humans that morph into wolfy things, it just spoils it; it just seems impossible that scientists could create something that can actually morph into something else.

Maximum Ride: School’s Out Forever seems to have an increased amount of humour; Max’s sarcasm and wit, combined with Fang’s jokes and The Voice make it a much funnier book that the Angel Experiment. It made me chuckle often enough, and no doubt you will too.

Maximum Ride: School’s Out Forever is a funnier and better sequel. It builds upon the slight lack of character building from the Angel Experiment, particularly with Ari. We’re still left utterly clueless about all the questions raised in book one , and it would be nice to get some answers to some of the questions in the next few books. As much as I like the series, it does need more of a foreseeable goal and focus, or else we’ll just get bored.