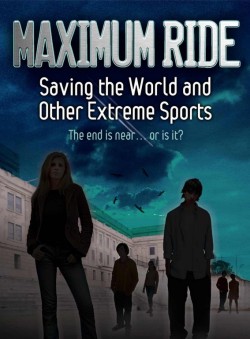 Published: 2008, April by Random House
Genre: fantasy, sci-fi Age: 12+
Synopsis: You’re about to join the adventures of Max, Fang, Iggy, Nudge, Gazzy, and Angel, six extraordinary kids who have powers like no other: they can fly, and they’re being chased – no, hunted – across America and around the world. THIS IS THE END, MY FRIENDS. But I promise that you’ll fly higher than ever before in this wild adventure, witness battles worthy of multiplex movie screens, and laugh until your sides hurt. There’s even a little romance... But all good things – and even terrible, unspeakable ones – must come to an end. This is that moment in time, I’m afraid. Either we save the world, or we crash and burn. And I mean all of us – even you, faithful reader, because you play a very big part in this story.

Evil scientists have a new plan for Planet Earth. Due to the unsustainability of keeping 6 billion people fed, healthy and with a space to live, the By-Half plan has been created. Basically, these evil scientists want to kill half the world’s population and let only those survive who are useful to the planet. But Max doesn’t like the scientists, and she doesn’t like the plan. She and the flock are the only ones who can stop them, and they’ll do anything to prevent this mass homicide.

It’s only the third Maximum Ride novel, and one of the three that fans claim are the best- but already, things are going down hill. As much as I wanted to enjoy this third adventure with the flock, there are multiple things that just niggle and annoy.

For a start, we still don’t know how Max is supposed to ‘save the world’ (get a move on, Patterson, I’m getting bored of the recycled story) and what she has to save it from- and this is really frustrating. Numerous hints throughout Saving the World And Other Extreme Sports seem to say that it has something with Global Warming or the like: something that I am not keen on at all. I have nothing against global warming- it’s when it’s pulled of in a cheesy way that it starts to annoy me. Fang manages to, all of a sudden, get all the kids round the world to protest. Something tells me that’s unrealistic.

Maximum Ride: Saving The World And Other Extreme Sports also introduces us to [more] antagonists. I have nothing against that, but when one of the chief bad guys is German and speaks with a German accent that is reminiscent of WW2 films from the 60s, I start to get worried. You can’t really get any more stereotypical than that. James Patterson, has obviously never spoken to a German, because contrary to popular belief, zey don’t all talk like zees, ezen ven you sink zey should.

In terms of entertainment value, though, Saving The World And Other Extreme Sports scores quite well. Why? Because it’s probably the funniest Maximum Ride book I have ever read. Max’s sarcasm does a fantastic job of lightening it up, particularly in the second half and her lines made me chuckle more than a few times.

Again, Maximum Ride: Saving The World And Other Extreme Sports has some great action in it, and the fast-paced plot and humour makes it easy to read, but the story hasn’t changed much since the first novel, and Saving The World just seems like a rehash of the first book. There are multiple false leads, and nothing is definitive. It’s frustrating that such a great idea for a novel could turn out with such flaws, particularly from an experience writer like James Patterson.

What did you think about Maximum Ride: Saving the World and Other Extreme Sports?