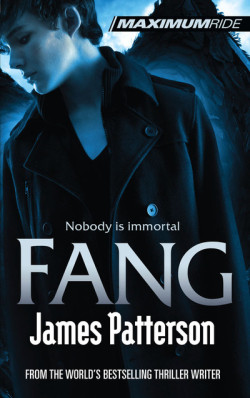 Published: 2010, April by Random House
Genre: fantasy Age: 12+
Synopsis: Fang will be the first to die. For years, Max has been on the run from evil forces threatening her and the Flock - but nothing could have prepared her for this horrifying prophesy delivered to her by Angel. Fang is Max's best friend, her soulmate, her partner in leadership of her flock of winged children. A life without Fang is a life unimaginable. Max's desperate desire to protect Fang brings the two closer than ever. But their world is turned upside down yet again when the Flock meet a wealthy scientist who has a great interest in the birdkids. He introduces them to another winged boy, the beautiful Dylan. Raised in a lab like the Flock, he exists for only one reason: he was created to be Max's perfect other half. Now, a battle of science against soul, perfection versus passion unfolds, twists, and turns ...and meanwhile, the apocalypse is coming.

Continuing their help with the organisation CSM, the Flock go to Africa, to help the locals there. But somebody else is also there, and he is not there for the locals. No, he is there for the Flock- and he is a scientist. He has developed a drug that will allow humans to evolve unnaturally fast- and now he wants to test it on the 98% human, 2% avian flock. His first target is Fang. Fang, Max’s first love, Fang, second in command of the Flock…

Fang is the sixth Maximum Ride book. Sadly, it’s not the best. As a fan, you’ll know that the first three books were fantastic- the idea was fascinating, the action was great and the characters were witty and somehow realistic. Max, particularly. Also, as a fan (and if you aren’t a fan, I recommend you go become one by reading Maximum Ride: The Angel Experiment instead if this review…), you’ll probably agree with me that books 4 and 5 were a huge downturn for the series, completely destroying everything that was so great about books 1-3 with it’s Eco-message. It probably no surprise to you, then, that Maximum Ride: Fang is not much better. As much as I was hoping that MR: Fang was going to take the series back to what it was, it didn’t.

Okay, it wasn’t as bad as The Final Warning and Maximum Ride: Max, but it still wasn’t up to scratch. As with a lot of James Patterson’s writing in the last year or so, Maximum Ride: Fang was lacking quite a considerable amount that was holding it back from becoming the next favourite Maximum book.

In my opinion, the most important reasons why MR: Fang isn’t super-duper is the plot. Or the lack of it. From the very first few pages, I was confused to were MR: Fang was leading us. I realise that even the first three books didn’t have much of a plot, but at least they had a goal which the reader new. MR: Fang just seems to skip randomly along, as if James Patterson just wanted to see where it took him. It was much the same with the previous two books. Apart from the fact that Max has to ‘save the world’ (and we still don’t know how), there is no real story that threads throughout the book and at the end pulls everything together in a nice bundle, ready for the next book/ the series ending. Because as much as I live Max and Fang and Iggy and the others, a story without a real story is not a book worth writing. There are still a ton and a half of questions that haven’t been answered since The Angel Experiment, would you believe it. In not sure what Patterson is waiting for, but I sure would like to see the answers to these questions, because, essentially, books 4,5 and 6 seem to have been dodging them just so that Patterson can make more dosh. Had book 4 been about Max (finally) knowing about how  she is supposed to ‘save the world’, what the voice in her head is etc etc then the most recent 3 episodes could have been fantastically awesome. Alas, it is not so, but I just hope James Patterson gets the message and starts answering these questions, so that the series draws to a close on a positive not. Please, Mr Patterson.

That was the biggest grudge I had about Maximum Ride: Fang, but something else I noticed was something about the characters. None of the characters seem the same as they were in the rest of the series: Fang was, at times, slightly odd and just too clichéd on his romantic side. Max isn’t as witty anymore, and far more selfish. Angel was downright odd, and the only ones who hadn’t changed were essentially Nudge, Iggy and Gazzy. It’s a shame about Max and Fang, because they’re really the stars of the show. And I’m not sure if these changes are accidental or not, but they really just don’t work.

Another thing (and this is really about the whole series) is the fact that we always have to be reintroduced to all the characters. The first few chapters are always clogged up with useless info we learned about in the previous books. I assume it’s to make new readers of the series learn about the characters, but they’re missing the best books and ideally should start at The Angel Experiment. Eh, it’s quite a small annoyance, but one that I’d thought I’d mention anyway.

I had high hopes for Maximum Ride: Fang. It didn’t achieve most of them, but the one it did achieve was that it was better than the last book, Maximum Ride: Max. And while MR: Fang is definitely not the greatest books in the series, you should probably read it just so you can take in all the new things that have happened. Don’t bother buying it, though. Borrow it from a friend or something, because I personally don’t think it is worth the £12 it is listed at.

And so my review cones to a close. It feels like quite a long one. All I have left to say is that I hope book 7 will be an improvement. Boy, I hope it is.