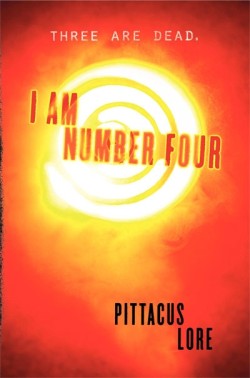 Published: 2010, August by Puffin Books
Genre: fantasy, romance, sci-fi Age: 13+
Synopsis: John Smith is not your average teenager. He regularly moves from small town to small town. He changes his name and identity. He does not put down roots. He cannot tell anyone who or what he really is. If he stops moving those who hunt him will find and kill him. But you can’t run forever. So when he stops in Paradise, Ohio, John decides to try and settle down. To fit in. And for the first time he makes some real friends. People he cares about – and who care about him. Never in John’s short life has there been space for friendship, or even love. But it’s just a matter of time before John’s secret is revealed. He was once one of nine. Three of them have been killed. John is Number Four. He knows that he is next . . .

When all hope was lost, nine were sent from Lorien. Nine. Nine were hunted. Three were killed. Now there are six, all gifted with extraordinary abilities, like running. Running from their killers. They must stay alive, their race depends on it. It is up to them and their guardians to re-establish them selves on Lorien, but it will not be easy. There will be death, tears, and blood. But they are the only hope.

I Am Number Four is one of those books you just can’t help being intrigued by in the bookshop. The title and tagline instantaneously ignite an interest in this sci-fi Young Adult (YA) book, a genre that is often suppressed in modern YA literature. Reading the blurb increases the tension. Then you open the cover. There’s a small paragraph telling you how all this is real. I’m not a fan of those. Books that tell me they’re real rather than showing me they’re real make me feel like they’re not worth reading. It kills the suspense. But reading on, I was mildly surprised.

I Am Number Four comprises mainly of first person description. At first, it is an effective way of telling the story. It’s soon noticeable that there is too much description. The dialogue is scarce, and when it does break through the descriptions, it brings relief. Those endless paragraphs that tell the story are simply too full with information. Those scenes which contain no dialogue become virtually unbearable. I skim them, as it seems to take multiple paragraphs to talk about something that could have been said in one. By the end, the action is so diluted in heavy descriptions that I simply skim the last 50 pages.

The initial concept is interesting- nine guys who have to be killed in order- but upon delving deeper, more and more cracks appear. The reason these aliens leave their home planet Lorien (LOTR, anyone?), is because another evil planet wants their natural resources. That simply reeks of Avatar, and even Lorien and the animals that inhabit it remind me of Pandora.

The characterisation. Oh dear. There are too many one sided characters in I Am Number Four. Not one has any depth, and all seem to be who they say they are. Nobody is a traitor, nobody is driven by a hidden desire. There seem inconsistencies within the character, and some act completely without relation to the backstory.

Apparently it’s fashionable to have interspecies romance now, because our alien falls in love with a native human. It surprised me that our alien is so socially adept when he has been keeping distant from everyone for the past ten years of his life. On top of that, the romance is soppy and without complications. Essentially, it is Twilight for guys. Half the book seems to be talking about how perfect their relationship is. Had the authors toned this down only a little, it would have made it much more realistic.

As much as I have criticised the book, I will read the sequel, in the hope that it manages to break out of the clichés and makes everything more realistic. I Am Number Four is an okay book, and I’m sure younger readers will love it, and it’s not a bad book. It just has a flaw too many to make it anything more than a mediocre piece of storytelling that would have been so much better had it gone straight into the film industry.

What did you think about I Am Number Four?

More in the Lorien Legacies: