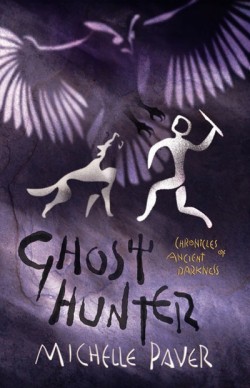 Published: 2009, August by Orion
Genre: historical fantasy Age: 10+
Synopsis: As winter approaches and Souls' Night draws near, the Eagle Owl Mage holds the clans in the grip of terror. To fulfill his destiny, Torak must seek his lair in the Mountain of Ghosts. He must defy demons and tokoroths, and find his way through the Gorge of the Hidden People. Wolf must overcome terrible grief. Renn must make an agonizing decision. And in the final battle against the Soul-Eater, Torak must face the most heart-rending choice of all.

Eostra, the last surviving Soul Eater has the forest in her grip. Sickness and freezing temperatures have eternal dominion. Torak must fulfill his destiny, to rid the world of this evil. The Ghost-Mountain awaits him. The Eagle Owl Mage’s creatures await him. And still he goes on, protecing Wolf an Renn from the eminent danger. Wolf grieves. Renn decides. And Torak faces a choice.

One of the problems I found with the Chronicles of Ancient Darkness, was that they could sometimes drag out quite long, and I would not be desperate to read them. But not with Ghost Hunter. There is plenty of action, but it is also very well described. Paver’s nack of discription of the stone age world is intresting, and yet it also works with the story, not bogging it down. Even if your not at all into history -I’m certainly not- it still bodes as intresting to see how they went about doing things.

As with the other books in the series, the characters are lovable and enjoying to read about. You could say that Torak was vaguely a hero archetype, but it isn’t obvious, and the setting soon wipes away that element. Renn is my favourite character in the series, and I have tio say, she has just got better and better. We get to see the Walker again in Ghost Hunter, and we get to know about Narik among other things…

My only problem with the book is this: there is no real epilogue! While there is a proper end, I would have loved to have seen the main characters when they where adults. Even just a small epilogue would have been great!

More in the The Chronicles of Ancient Darkness: