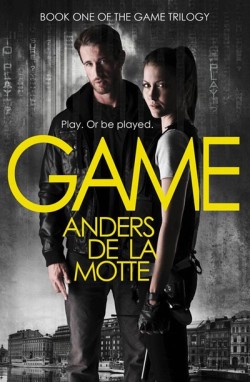 Published: 2013, December by Harper Collins
Genre: action, thriller Age: 14+
Synopsis: Play or be played in book one of the Game Trilogy , the Swedish thriller series taking the world by storm.Are you ready to play?When Henrik “HP” Pettersson picks up a mobile phone on a Stockholm train one morning, he has no idea that his life is about to change forever.The phone’s invitation to play “The Game” is too tempting to resist and he soon finds himself embarking on a series of dangerous missions. The more daring the task, the greater his thrill and reward.But fun soon turns to fear as his Police Detective sister is dragged into the action. As their lives spiral out of control, HP faces a challenge he never expected. Can he outwit The Game before it’s too late, or will The Game play him?

The greatest attraction of Game by Swedish author Anders de la Motte is undoubtedly its premise, which riffs on a global-conspiracy-type game (THE Game) which is effectively a televised betting machine that allows people with grudges to take revenge on their peers for extensive amounts of money. It’s the sort of concept that would power a Bourne-esque thriller, with layers of intrigue and a smattering of action in the form of explosives and a deeply entrenched layer of conspiracy.

Sadly, the rest of the book doesn’t match Motte’s inventiveness, and once we pass the thrilling first third in which we’re caught up in the realms of the Game, we’re spit out and left with nothing more than some rather dull biographical content on the characters who are unsuccessfully trying to break the status quo. This is the problem: virtually nothing happens in the last two thirds of the novel. Instead, we’re treated to HP’s bumbling search for revenge, a lot of telling-and-not-showing and a climax that is so anticlimactic I stopped reading in the last 20 pages of the book because I realised I just didn’t give a rats’ arse.

Of course, perhaps the “character development” (if we can call it that) wouldn’t have been as bad if it hadn’t been for HP’s completely and utterly unsympathetic nature. We’re frequently told that he is “intelligent” – that’s why he’s selected to play the Game – but not once do we see his alleged brain in action. Instead, we pre-empt every “revelation” he makes as part of his inane monologues which Motte chooses to dip into throughout his narrative. Couple that with the relentless (and pointless) effing and blearing on every page and you can’t help but feel sick and tired of the “man” (he acts and thinks more like a 12 year old – no wonder this is being marketed at YA?) we’re supposed to be rooting for. Normen’s narrative is little better, and even the abuse she suffers doesn’t really gain her much sympathy. And to be perfectly honest, I still don’t know why she’s included in the novel; but perhaps that’s because I failed to read the last 20 pages.

Game has very few redeeming qualities and I remain a little perplexed at how it sold so many copies. Of course, perhaps it’s all down to translation; but in general, I felt it was translated if not well, not poorly either. The simple truth is: the characters are so dull that I couldn’t even bother to read 20 pages to actually find out what happens to them. And I haven’t left a book unfinished in years. Give Game a pass and opt instead for something a little more engaging.

More in the Game Trilogy: