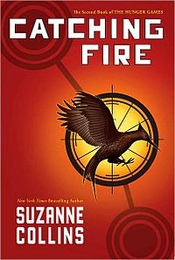 Published: 2009, September by Scholastic
Genre: dystopian Age: 12+
Synopsis: After winning the brutal Hunger Games, Katniss Everdeen returns to her district, hoping for a peaceful future. But Katniss starts to hear rumours of a deadly rebellion against the Capitol. A rebellion that she and Peeta have helped to create. As Katniss and Peeta are forced to visit the districts on the Capitol's cruel Victory Tour, the stakes are higher than ever. Unless Katniss and Peeta can convince the world that they are still lost in their love for each other, the consequences will be horrifying\. The terrifying sequel to The Hunger Games.
Watch the book trailer

Just when you think you’re safe, the opposite is true. Katniss has been threatened by President Snow that if she cannot prevent the uprisings happening in the districts, her friends and family will pay. But that’s not all. The Capitol is planning a thrilling 75th Hunger Game and to mark the momentous occasion of another quarter century gone by, the Games will be particularly bloody. Katniss is a lot less safe than she thinks she is…

The second book in a trilogy is always notoriously hard to get right; few second books are better than their original counterparts or the concluding novel. Catching Fire is no different. Its fatal flaw is that it is far too similar to The Hunger Games. I believe the reason a series exists is not to replicate the first novel but to expand and extrapolate the events and ideas, and Catching Fire only does this in the last 50 pages or so. Prior to that, it’s simply a less satisfying rehash of the first novel.

I could forgive Suzanne Collins if the characters had in some way grown or changed, but they haven’t. I’m getting slightly bored of Katniss’ feelings for Gale, which in my opinion should be purely platonic- their “romance” feels forced and unnatural and seems purely to exist to create a love triangle. Collins doesn’t seem to understand that you can love someone as a friend.

Katniss is still very much the young woman she was at the beginning of The Hunger Games, though she does realise that she is very self-preserving and uncaring. She seems to have learnt nothing from surviving the Games. Peeta is still very much in love with Katniss, though this is shown a lot less. It’s clear his feelings haven’t diminished; how he manages to be around Katniss all the time when she doesn’t return his feelings is baffling. Collins has also overstepped her mark when it comes to drawing out the inevitable relationship between Peeta and Katniss. It was fine to have that in the first book, but nothing really changes until, again, the last 50 pages.

Dare I say it? Catching Fire is a rather dull novel until the last 50-100 pages. Even then, Collins simply doesn’t build up to her “shattering reveal” enough, and it provides a bit of an anticlimax. Catching Fire would have been far better off with more emphasis on the revolts and the people of the Districts -perhaps even introduce another point of view- than spending two to three hundred pages on essentially retelling The Hunger Games.

Catching Fire is a rather disappointing sequel to The Hunger Games. Though the prose is still far from perfect, its biggest weakness is that it is far too similar to the first book and doesn’t really give us anything new to work with until page 400. I was hoping to read a thrilling story of the beginning of the revolution of Panem, but instead I got an old story told in a different way. I just hope Collins can recover from this shortfall (she has set herself up well with a boggling cliff-hanger) in the third and final instalment, Mockingjay.

What did you think about Catching Fire?