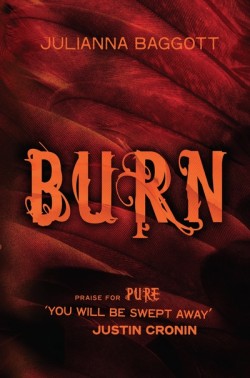 Published: 2014, February by Headline
Genre: dystopian, post-apocalyptic Age: 13+
Synopsis: An epic tale for fans of Justin Cronin, THE HUNGER GAMES and Cormac McCarthy. The final part in the PURE trilogy. Inside the Dome, Partridge has taken his father's place as leader of the Pures. His struggle has led him here, intent upon bringing down the Dome from the inside, with the help of a secret resistance force. But things are not as simple from his new position of power and he finds himself tempted by his father's words: perhaps if the world is to survive it needs the Dome - and Partridge - to rule it... As Partridge's resolve weakens, Pressia and Bradwell continue piecing together the clues left to them from the time before the Detonations. It is their hope that they will be able to heal the Wretches, and free them from their monstrous fusings and the Dome's oppression once and for all. But everything depends, too, on Partridge. Separated by distance and history, can they still trust their friend and ally? Or is the world doomed to an eternity of war and hardship?

In the Dome, Partridge is trying to take over control from his father. He’s trying to work for the better – but that’s not always easy when you don’t know who’s on your side or not…Outside, Pressia, Bradwell and El Capitan are returning from distant lands with a vial that could cure the wretches from their fusings, but also a container filled with something that could take down the dome. As tensions build between the three, their desirable courses of action diverge….

Julianna Baggott’s Pure Trilogy is one of the best post-apocalyptic/dystopian series out there right now. As usual, it’s really, really well written. The prose is visceral, it’s vivid; it paints a picture of Pressia’s ashen world in cinema-like qualities. In fact, it’s like the IMAX of prose; huge expansive landscapes filled with ash, fire and dust which are intercut with the pristine squeaky-clean gloss of the Dome. It’s a concept artist’s wet dream and my, does it make good reading.

One thing I haven’t commented on in my previous reviews is Baggott’s use of the continuous third person, which is fun and different. It lends events of Burn a level of immediacy that makes the reading experience even more surround-sound (if we’re continuing with the cinema metaphor…)

Baggott, as we saw in Fuse, is also crazy good at plotting, and Burn is marvellously paced; there’s always something going on somewhere, even if it isn’t (and it rarely is) an action set-piece. More often than not, the rise and fall of the characters is what dictates the ebb and flow of the story and weaves an engaging story that is reminiscent of the Greek epics and doesn’t deal everyone a happy ever after.

In fact, Baggott’s characters are superb. Magnificent. Perfectly realised. There’s not a superlative in existence that properly describes them. They’re not just characters, they’re real people with real emotions: whether those emotions are admirable or despicable. Pressia, who thinks that undoing her fusings and those of the wretches will fix everything between the Dome and the outside; Bradwell, who wanted to die on his own terms but had that right taken from him by Pressia and just wants to see the Dome destroyed, gone, forever. Partridge, who is losing control of the Dome and feels hideously inexperienced when it comes to politics…Lyda, who has fallen in love with the ashy outside and can’t stand the sterility and façade of the Dome and El Capitan and Helmud, who would do anything for Pressia. Each and everyone one of them have their own story, their own fears, joys and desires. Burn isn’t just the story of revolution; it’s the story of love and life and joy and pain and sadness.

I want to reiterate: I do not think there is a better young adult post-apocalyptic or dystopian series out there right now. The Hunger Games is good, but it falters in the execution; the Divergent trilogy has lost its shine. The Pure Trilogy, however? Some of the best fiction I’ve read in a long while. So yes, don’t hesitate to click that “buy” button and find out for yourself.