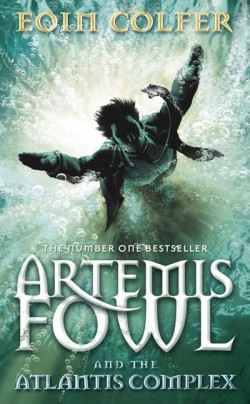 Published: 2010, July by Puffin Books
Genre: fantasy Age: 11+
Synopsis: ARTEMIS FOWL’S CRIMINAL WAYS HAVE FINALLY GOT THE BETTER OF HIM . . . Young Artemis has frequently used high-tech fairy magic to mastermind the most devious criminal activity of the new century. Now, at a conference in Iceland, Artemis has gathered the fairies to present his latest idea to save the world from global warming. But Artemis is behaving strangely – he seems different. Something terrible has happened to him . . . Artemis Fowl has become nice. The fairies diagnose Atlantis Complex – that’s obsessive compulsive disorder to you and me – dabbling in magic has damaged his mind. Fairy ally Captain Holly Short doesn’t know what to do. Because the subterranean volcanoes are under attack from vicious robots and Artemis cannot fight them. Can Holly get the real Artemis back ­­­before the robot probes destroy every human and life form.

Artemis has a plan to save the World. His work is cut out, though, after a rogue space probe crashes into Iceland and starts attacking an assembly of Fairies and Artemis. It seems this probe is being controlled by an unlikely villain, and sadly Artemis isn’t there to stop him…in his place is Orion, his alter-ego: Artemis is suffering from Atlantis Complex, the Fairy version of multiple personality disorder….

I believe it’s been two years since Eoin Colfer last published an Artemis Fowl adventure. So when I found out that Artemis Fowl and the Atlantis Complex was coming out this July, I was immediately excited, particularly by the concept of the story: having Artemis suffer from the Fairy version of multiple personality disorder had the potential to make a very funny novel. It’s very different to what I imagined and hoped for, and not always in a good way.

My biggest disappointment with Artemis Fowl and the Atlantis Complex is the beginning. And by beginning, I don’t just mean the first chapter; I mean most of the first half. The first chapter, in my opinion, hasn’t got any major issues; it’s after, when we’re introduced to our second point of view (that of Julius Root’s younger brother). In all honesty, I found his chapters quite dull, and was far more interested in what was up with Arty. After finishing the book, I realised this was not so much to do with the story, but with the character. I think it is Juliet who makes a remark about Root in the very last pages, and at that point it became obvious that while Colfer had a good idea about who Root was, it just doesn’t convey well onto paper, and there just isn’t a connection. If this hadn’t been a problem, I think the Atlantis Complex could have been a fantastic book.

Apart from this niggle during the first half, the Atlantis Complex is actually pretty decent; there are some fantastic jokes every so often, and I’m sure everyone around me heard me chuckle every twenty minutes or so…

It’s interesting to see Artemis change in the Atlantis Complex; it’ll be great to see what happens in further books, and I suspect it could hold a great many chuckles. Elsewhere among the characters, there isn’t much change; we’ve still got Foaly, Mulch (who makes quite a long appearance), Butler and Juliet, which is interesting, as we haven’t seen much of her in recent books. I suspect she’ll be a lot more involved in book 8, if there is one (I’m sure there will be).

Ever wondered what Atlantis is like? Well this is your book, as Atlantis makes a pretty prominent appearance. In fact, Haven City is not featured once. Instead, we’re rewarded with underwater scenes that make a nice change to the usual story setting.

As a fan of the books, it’s been quite hard admitting that there is something odd about the first few hundred pages. It might just be me- I’m not really sure. Perhaps I just had to many of my own ideas of what could happen that I just didn’t like it. The climax makes up for it though, and the ending is oddly thoughtful. It’ll be very interesting to see what happens in book 8.

More in the Artemis Fowl: