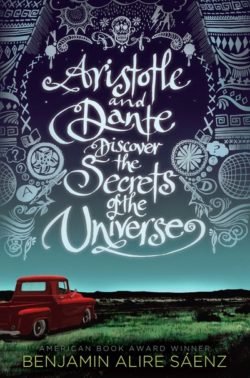 Published: 2012, February by Simon & Schuster
Genre: bildungsroman, LGBT Age: 12+
Synopsis: Aristotle is an angry teen with a brother in prison. Dante is a know-it-all who has an unusual way of looking at the world. When they meet at the swimming pool, they seem to have nothing in common. But as the two loners start spending time together, they discover that they share a special kind of friendship--the kind of friendship that changes lives and lasts a lifetime. And it is through their friendship that Ari and Dante will learn the most important truths about themselves--and about the kind of people they want to be.

Let’s be honest. I can’t really add anything to the countless reviews that already sing the praises of this wonderful book. So really this is just an opportunity for me to insist that you buy Aristotle and Dante Discover the Secrets of the Universe RIGHT NOW. Now. Do it.

Closer in tone to the movie Boyhood than anything else, Aristotle and Dante Discover the Secrets of the Universe is a tale of transition from boy to man. More than that, though, is that it’s about the process of seeing your parents not as gods but as people just like you and me. And sometimes, parents can be just as childlike as any fifteen year old, and fifteen year olds can be more adult than their parents.

Dante and Aristotle – two lonely teenage boys. At least, they’re lonely until they discover each other, and from that moment onward they share the bond of friendship in all its beauties and complications. As they share two summers together, their lives diverge and converge again and again until they (and their parents) realise some of the most important things about life.

The only discernible criticism that has been levelled at this novel has been at the ending. And yes, the ending is a little left field – so much of the novel is spent denying it that you can’t help but rule it out by that point. When it does come, it comes so close to the end that you don’t really have time to go “oh, ok” before it finishes. But hey. The 1980s were different times, right?! (I think this is especially important as it’s important to knowledge that both Ari and Dante are living in the 80s, a time when the LGBT+ rights landscape looked very different to how it does now).

But really – that criticism is but a drop in the ocean. Aristotle and Dante Discover the Secrets of the Universe is an excellent contribution to the LGBT canon and has – in the 4 years since its publication – solidified its place as a novel to be read and re-read.