To celebrate the publication of RAILHEAD, one of my all-time favourite authors Philip Reeve is here to discuss the aspects of his creation that begin with D – Desdemor and the Datasea….

There’s something beautiful about an abandoned seaside resort. I first noticed it as a child, wandering along the seafronts of Brighton in the off season. The gaudy signs outside amusement arcades look sad and lost in winter weather; paint peels from shuttered cafes painted the colours of neapolitan ice-cream. Sometimes at secondary school I’d slip out for a walk at lunchtime, down to the front at Black Rock, which was like a JG Ballard theme park in those days; the grey sea rolled against the grey concrete buttresses of the new marina, and a few feet of dirty rainwater gathered in a drained and fenced-off open-air swimming pool. 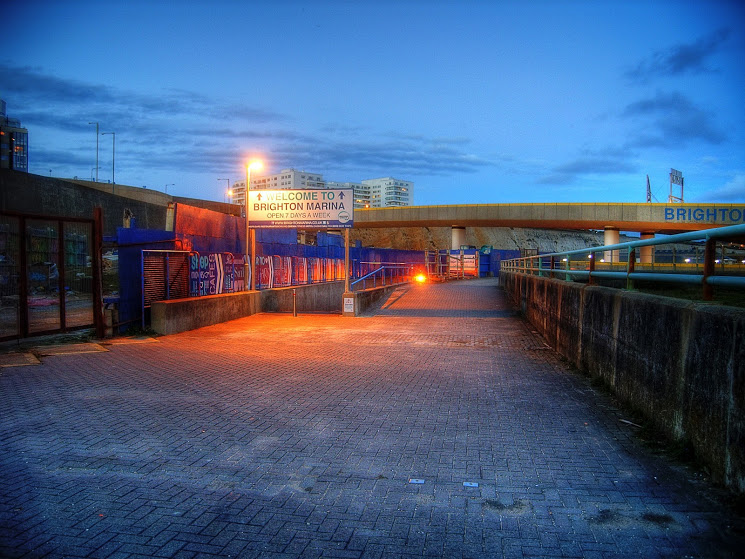 It all gave me a feeling that I couldn’t put my finger on, and still can’t – the best way to explain it is just to create an out-of-season resort of my own. In Desdemor, the off-season has lasted for a long time – it lies on the water-moon Tristesse, a world abandoned fifty years before Railhead begins. (I imagined a low-gravity, futurist Venice crossed with with the photographs of my old friend Justin Hill, who was with me on some of those winter seafront walks and who now specialises in photographs of an eerily abandoned Brighton.) Offshore, dimly visible through the mist that hangs on the horizon, the rings of a huge gas-planet reach up the sky. The ocean which booms against the crumbling promenades is called the Sea of Sadness.

But there is another sea in Railhead; the Datasea, which laps around all the different worlds of the Network Empire…

One of the things which was noticeably absent from all the science fiction stories I read in my teens was the internet. The authors of the ‘50s and ‘60s imagined spaceships and aliens, satellites and supercomputers, but as far as I know none of them saw the World Wide Web coming. Nowadays, it’s very hard to imagine an advanced future which doesn’t do most of its business and socialising online.
The Datasea is composed of the interlinked internets of every planet in the empire. It’s not just used by people; it’s home to all sorts of artificial intelligences, ranging from the godlike Guardians to spambots, data entities and semi-intelligent viruses, which make it a fairly dangerous sea to surf: people can get lost in there, like mortals straying into Fairyland. So most people make sure their browsing never goes beyond the firewalled Data Rafts, where businesses and media outlets have their sites, and where friends can interact in chatrooms and virtual environments, while the trains which travel from world to world constantly update each planet’s local Datasea with information which they carry in their minds. Indeed, some people believe that the Guardians only built the K-bahn so that information could travel quickly across their huge virtual realm, and the freight and passenger cars they haul are simply a sideline…