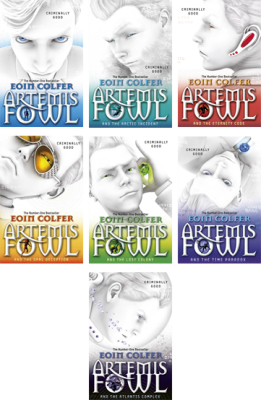 Yesterday, on the 4th March, Eoin Colfer and a small group of people gathered in Picadilly Circus, London, to unveil the new, 10th anniversary edition covers of the entire Artemis Fowl series. I’m often quite annoyed when publishers decided to rebrand covers mid-series, as it often means that I have two mismatching halves of a series, but I’m hoping that Puffin will be doing an ‘old’ version cover for the last book in the series.

The new covers are in quite a different direction from all the previous Artemis Fowls- clean, hi-tech and white seems to be the theme for this set. As well as that, they also seem to be displaying the titular character himself, something which all previous covers have veiled in shadow. While I do appreciate the new covers, I have to admit that I personally do much more like the previous sets of covers, which were very beautiful in my opinion. As I said earlier- I hope they publish the last book both in this covering series and the previous one. One thing I do much like about the new covers, however, is the slogan- “Criminally good” which I think is rather appropriate and amusing.

What do you think of the new covers?

What did you think about News: Artemis Fowl Book Cover Rebranding?