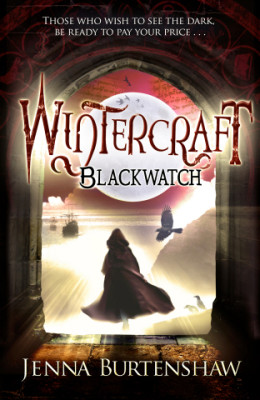 This cover reveal is a bit late in comparison to when the cover was actually released; and I myself only heard about this today. So, for whatever reason, it’s a bit late- but at least it was released!

Anyway, for those who haven’t heard of Wintercraft (which I reviewed last year) here is the blurb:

Ten years ago Kate Winters’ parents were taken by the High Council’s wardens to help with the country’s war effort. Now the wardens are back…and prisoners, including Kate’s uncle Artemis, are taken south on the terrifying Night Train. Kate and her friend Edgar are hunted by a far more dangerous enemy. Silas Dane – the High Council’s most feared man – recognises Kate as one of the Skilled; a rare group of people able to see through the veil between the living and the dead. His spirit was damaged by the High Council’s experiments into the veil, and he’s convinced that Kate can undo the damage and allow him to find peace. The knowledge Kate needs lies within Wintercraft – a book thought to be hidden deep beneath the graveyard city of Fume. But the Night of Souls, when the veil between life and death is at its thinnest, is just days away and the High Council have their own sinister plans for Kate and Wintercraft.

As you can tell, it’s a kinda ghosty/paranormal/fantasy novel, and well worth reading. When I finished reading it, I fully expected Jenna Burtenshaw to go on and write a sequel, so I wasn’t surprised when I found out that the second novel will be out in April this year. Now that we’re getting closer to Wintercraft: Blackwatch being released, I am getting more and more excited, and seeing the cover is only heightening my excitement!

What I liked about the cover of Wintercraft #1 (image left) was it’s very magical, ghost like feel- and the purple colour scheme made it look wonderfully majestic. I’ve got to admit, the cover of Blackwatch did slightly disappoint me at first; because it is far more bright and colourful; less magical almost. The pale yellow and dark red colour scheme certainly doesn’t entice me (sorry cover designers!) but on close inspection, I am getting to like it- the boats in the distance are playing on my mind, and I’m wondering where Jenna Burtenshaw will take this novel- and it’s not too long to wait!

So, what do you guys think? Is it better or wose than the first cover?