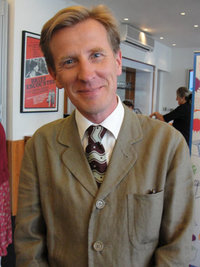 I am quite a fan of Philip Reeve’s works, so when he agreed to do an email interview with me, I was quite excited! Philip Reeve is the author of the Mortal Engines Quartet, as well as the prequel series Fever Crumb. He has also written a Here Lies Arthur, a rendition of the Arthurian Legend with a slight twist…Follow Philip Reeve on Twitter and visit his blog.

ThirstforFiction: Tell us a bit about the plot that drives Mortal Engines…
There are lots of plots and sub-plots in the series, but it’s all set against the background of a far-future world where cities move around, mainly on wheels or caterpillar tracks, and attempt to capture other cities which they can cannibalise for raw materials.  The system is called ‘Municipal Darwinism’.  Mortal Engines, Predator’s Gold, Infernal Devices and A Darkling Plain deal with the last couple of decades of this world as it becomes unsustainable and begins to collapse into chaos and war: against this background I’ve set a sort of love story between a very nice, peaceable, rather shy young man and a dangerous, intense, extremely ugly young woman. Fever Crumb and A Web of Air are set hundreds of years before, when it’s just getting started, and they tell the story of Fever, a girl who’s been brought up to be rational and logical in a world which is neither of those things.

T4F: How did you think of this fascinating concept of moving cities? Was it

an overnight thing, or did it start out as something very different?
I was working on a different story – a sort of alternate Victorian Mad Max kind of thing – when the idea of a moving city (which isn’t particularly original) occurred to me, and then the idea of moving cities that chase and each each other (which is, as far as I know).  I immediately scrapped the story I’d been writing and got to work on Mortal Engines, although writing was just a hobby at the time so it was many, many years before it reached its final form.

T4F: Many of the names featured in the Mortal Engines Quartet are unusual but very good. How do you think of them?
Most of the best ones just come into my head.  Often they’re borrowed from flowers (like Pennyroyal) or birds (like Shrike and Smew) or places (Natsworthy is a spot near where I live on Dartmoor.)  There are others whose origins I just don’t know; I have no idea why names like Hester Shaw, Bagman Creech or Fever Crumb came into my head, but they sound right to me.  I like making up names, so I tend to name even very minor characters and places, and invent names for makes of gun or airship or whatever, which is fun to do, but also hopefully adds a bit of texture to the world I’m describing.

T4F: You’ve returned to the World of Mortal Engines (WoME hereafter) with your prequel series, Fever Crumb. Do you suspect you’ll return again after you’ve finished the Fever Crumb series?
It’s quite a comfortable world for me to write in, because it allows me to do al kinds of sci-fi

and fantasy stuff, and have jokes, and also to refer to the real world in a way that I couldn’t if the stories were set in Middle Earth or on some far-flung planet.  So I expect I’ll keep returning to it, but I hope I’ll be paying visits to other worlds and other genres in between spells in the WoME.  The Fever Crumb books don’t have as much of a story-arc as the first four; ideally they’ll all stand alone, and I don’t yet know how many there will be.

T4F: You often talk of how you think Sci-Fi is a neglected and frowned upon genre. Can you just explain some of your beliefs on the subject?
Well, that’s not something that upsets me.  In fact I quite like it!  Back when I was writing Mortal Engines I remember hearing Yasmin Alibhai Brown on the radio saying that she didn’t read sci-fi because ‘she didn’t like books with metal in them’, and I think that sums up the view of our cultural elite.  It’s quite respectable to write a crime novel, so PD James and Ruth Rendell get huge full-page reviews in the newspapers when they publish their latest whodunnit; these books are regarded as casting some sort of light on human nature.  But a vastly more interesting author like M John Harrison can only hope for a little capsule review tucked away on the back page with a couple of other sci-fi books.  Even JG Ballard, who was probably the greatest British writer of the post-war era, was never viewed as such by the literary crowd, and I’m sure that’s because his work was either sci-fi or flavoured by sci-fi.  They think novels should be about fine writing and subtly delineated characters and so forth, and I’m all for those things, but all you really need for a sci-fi story is a good idea.  Sci-fi doesn’t really spring out of the literary tradition at all.  A lot of it comes out of popular engineering magazines from the turn of the last century, and although it’s got much more sophisticated since then, it still has grease under its fingernails; it’s never going to be respectable.  Which is, of course, an enormous strength!

T4F: I know you don’t specifically plan your books, but do you have a timeline of events (for the WoME) that you stick to, or do you just write and hope it fits in with the other books?
A timeline has sort of evolved, because people in the earlier books mention things that

have happened during the WoME’s history, and I try not to contradict that.  Although, if I really want to do something different, I can always say that they’d got their history wrong!  I’d rather bend the world a bit to fit a good story than hobble the story to fit the world.   In a long series it’s quite important not to paint yourself into a corner, I think; I like to leave myself plenty of wiggle-room.

T4F: The WOME has lots of characters- how do you create them all? Do some of them have elements of you in them, or are they perhaps based off real life people?
I suppose there’s probably some element of me in most of the lead characters, though that’s not deliberate, it just happens, rather like an actor bringing some part of his own personality to a role.  Those are the characters I want to write about – Tom and Hester, Fever, Valentine – and often I think of them before I really know what the story will be like.  Then there’s a sort of second tier of characters who come in because the story needs them, although sometimes some of them develop a life of their own and become just as important.  I can usually picture these secondary characters very clearly in my mind, though oddly I find the main characters much harder to ‘see’, perhaps because I’m usually inside them, looking out.

T4F: When you wrote Mortal Engines, did you plan it to be a four part series, or did you initially just write it as a stand-alone novel?
I had no way of knowing that it would ever be published, so no, I never thought of sequels, it was just a stand-alone.  It went through many drafts though, and some of them were much longer and featured ideas which later found a home in the sequels – the raft cities, the Green Storm etc.

T4F: Since writing the Mortal Engines Quartet, you’ve also adventured out of the sci-fi/steampunk genre- in your novel Here Lies Arthur. What made you want to write about the Arthurian Legend?
Having ‘done’ the future I thought it would be a good idea to do the past, and I’ve long had

an interest in the Arthurian legends: they were a bit of an obsession of mine while I was in my teens.  For me they’re an expression of a particular type of upland landscape which I love, a particular wintry light that you find in those places, and which I recognised as a teenager in the films The Black Angel and Excalibur, which in turn led me to Malory, Tennyson and the paintings of the Pre-Raphaelites.  But of course those are very magical, fantastical versions of Arthur, so I decided mine would have to take the opposite approach and be as gritty and down-to-earth as possible.

T4F: Your main character in Here Lies Arthur is a young girl -although she acts as a boy for half the novel. Was it easy to write a story centered around a young girl, or did you find it tricky?
The Dark Age Britain portrayed Here Lies Arthur is very much a man’s world, so I thought it would be more interesting to look at it through a girl’s eyes.  It came very naturally and didn’t feel tricky at all (though of course whether she’s a convincing girl or not isn’t for me to say).  Often when I start a story I find that the main character is a girl (Hester is really the main character in the Mortal Engines quartet, and now she’s given way to Fever Crumb.)  I don’t know why that is.  I suppose that there’s a danger these could be very boyish stories, with all the machinery and adventures, so putting a girl at the centre balances things a bit.  And maybe it gives me a bit of distance, too.

T4F: And finally, when you write, what is your aim?
I keep thinking of these strange ideas and images, and a story is a machine for getting them out of my head and into other people’s heads. I also aim to entertain myself, in the hope that readers will also be entertained.

What did you think about An Interview with Philip Reeve?