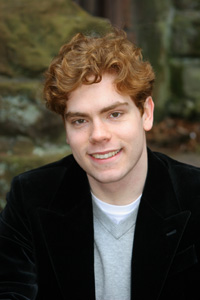 When Puffin sent me copies of The Midnight Charter and The Children of the Lost, the first two novels in a YA fantasy trilogy by David Whitley, I didn’t know what to expect.  They sounded interesting- but they turned out to be fantastic. And ever since, I’ve been a huge fan of David Whitley. It’s quite fantastic that David has agreed to do an interview with me, and he has lots of great answers! So, without further ado, here’s the interview.

At 25, you’re quite a young writer, particularly as you have written some fantastic books. Did you ever feel that your age was against you? Were you surprised when you manuscript for The Midnight Charter was accepted by Puffin?
I was certainly delighted! It’s always been a dream of mine to write, and I was fully prepared to be sending my manuscripts to publishers for years. I don’t think that my age told against me, in fact, it was something of a selling-point for them.
As for the manuscript being accepted, that was very much thanks to my brilliant literary agent, who looked at a novel which I wrote when I was sixteen, and although he didn’t want to take it, he liked it enough to ask me to send him my next manuscript.
The next manuscript was the first six chapters of The Midnight Charter.

Can you tell our readers a bit about the Midnight Charter and the Children of the Lost?
The Midnight Charter is a historical fantasy, set in the 18th century city of Agora – a city where literally anything can be bought and sold: thoughts, emotions, memories. Even children are possessions until their 12th birthday. My main characters, Mark and Lily, have passed that all-important birthday, but they will have to learn fast to survive in a place where you are only as valuable as what you are willing or able to trade, and to be in debt is to be cast out onto the streets. They have to choose – are they willing to submit to the city’s rules, or reject them and try to find their own way? And what does the Director of Receipts, the shadowy ruler of the city, have planned?
The Children of the Lost follows Mark and Lily as they are banished from Agora, and must set off into the mysterious new land of Giseth. Forced to rely on each other, alone and abandoned in a wintry and sinister forest, they take refuge in the seemingly idyllic village of Aecer – a village where personal possessions are unknown, and everyone is equal. To their amazement Mark and Lily are taken in and freely offered shelter and comfort. Idealistic Lily passionately wants this place, such a utter contrast to Agora, to be their true goal and destination, but Mark is uneasy. He’s an Agoran through and through, and all his instincts are warning him that, in the end, there will be a price to be paid…

Agora is quite a different world from us, although it shares many ideas with capitalism- in an extreme form. What was your motivation and inspiration for writing such a story?
Agora first came to me when I was on holiday in Prague. I was in the main Old Town Square, browsing around the “olde-worlde” market stalls, looking for souvenirs. I’d wandered quite far in, and I looked up and noticed that, from where I was, the stalls had pressed in so closely that all of the historical sights – all of the things the souvenirs were about – were completely hidden from view. In fact, all you could see were the rooftops of the beautiful old buildings over the tops of the stalls. And it occurred to me that if the stalls kept on encroaching over the city like that, they’d cover everything that was worth seeing, and they’d have to start selling souvenirs of each other!
It sounds like a silly little idea, but it wouldn’t go away, and the image of a beautiful and ancient city where anything could be bought and sold began to grow in my mind. Of course, an idea like that is charged with all kinds of political and moral questions, which I seized with gusto, but it all began with a thought that just wouldn’t leave me alone.

Mark and Lily, in the Midnight Charter, are both young- do you find it hard to write from a 12 year old’s perspective, or do you remember how you felt 12 years ago?
It kind of depends which 12-year-old – sadly, in our own world today, many 12-year olds have had far too much experience of the tough side of life. And of course in my story Mark and Lily don’t think of themselves as children because in Agora they’re not – the age of adulthood is twelve, and their society expects them to enter the adult world. But first and foremost, I write Mark and Lily from their personalities, which I hope are as rich as a character of any age, although I keep in mind that they might not be as familiar with the world around them as some of their older friends. And of course it comes in handy, in terms of a narrative, as they can discover the darker secrets of my fantasy world along with the readers!

Is there a particular reason that you wanted to write for young adults, or did you not think about targeting a particular audience when you penned The Midnight Charter?
I think that young adult fiction is great because it gives so much freedom to develop a range of ideas and thoughts. My ideas tend to have elements of fantasy, historical fiction, mystery, thriller etc., and whilst mainstream fiction often likes to pigeonhole a book in one genre, young adult fiction allows a wider range. And that’s all down to the YA readers being willing to keep a wonderfully open mind.

Do you wish to explore the world of Agora more after you finish the third and final book in the series, or do you think you’ll write other books?
Oh, does that have to be an either/or? I’m very fond of Agora, and when you reach the ending of The Canticle of Whispers, (as I hope you will!) you’ll see that although this story has definitely come to an end, it would be entirely possible to set more books in this world. But right at the moment, I’m planning a different world entirely: a modern, war-torn place, but with a secret more bizarre than anything I’ve done before…

Your writing ability was recognised at a young age -you were shortlisted for the Kathleen Fiddler Award aged 17- were you always good at writing, or how did you develop your obvious passion for literature?
I’ve always been a storyteller – I remember watching a cartoon aged six and thinking “that didn’t end the way it should”. But for a long time, I only made up stories in my head, and never tried writing them down. The Kathleen Fidler Award was actually a major turning point for me. There was that gap of time between finishing GCSEs and starting on A levels, my friends were doing work experience things so I decided what mine would be – I finally had to buckle down and write a full-length novel. Entering for the Award was a way of finding out if I could do it. Finishing the book was the goal – reaching the shortlist was a massive bonus!
The passion for literature, on the other hand, is lifelong. Thanks to being given a lot of brilliant books when I was younger, a spectacular introduction to Charles Dickens at the age of fifteen, and several inspiring English teachers and tutors.

How do you come up with your ideas in your stories? Are they inspired from dreams, for example, or do you discover them a different way?
An idea can spring from almost anything – from dreams, from odd thoughts, from seeing something in a museum or a shop. It sometimes gets to the point where I can barely look out of the window without thinking, “Oh, that could make a story”. However, most of these ideas will quickly fade – it’s only the ones that I’m still thinking about weeks later that are usually strong enough to turn into a novel.

When you write, do you think of the people who read your books, or do you just write something you enjoy?
The trouble is, if I ask five people what they like about my books I will get six different opinions! Which is as it should be – every reader gets something different, but it means that it’s impossible to try to predict what readers want. In the end, I write novels that I would like to read, try to make them as thought-out, well-written and entertaining as possible, and hope that others share my taste!

Authors have different means of writing a story -some plan their novels, and other hate to do so- are there any things that you normally do before/whilst writing a novel?
I am an obsessive planner – I usually have at least ten pages of notes before I start – a full plot outline, descriptions of all the characters, describing their character arcs and individual development, and ideally a chapter-by-chapter breakdown of the book. This saves me from the terror of staring at a blank page and thinking “So… now what?”
You might think that this ends up being restrictive, but quite the opposite – with a firm framework in place, I feel much more free to invent smaller details and sometimes whole characters as I go along, knowing that they will fit into the overall structure and not unbalance the book.

What is the most enjoyable part of writing a novel?
Probably the same as the most enjoyable parts of reading one! There are certain, climactic scenes that I really look forward to writing, where all of the build-up and the plotting have finally paid off. Those scenes practically write themselves – I’m so keen to get to the end!

How do you make the characters who they are- do they all have elements of yourself in them, or is there a method to it?
Usually, the characters begin as a single line of description – “main character – doesn’t like Agora”, “supportive friend”, “deceptively pleasant villain”. At this point, they’re created to serve the story, and can be created and removed easily as the plan is formed.
However, as soon as I have a complete list of characters, then they start to get some more personal attention. I start to think about what their names would be, how they feel about their situation, and the other characters. And most importantly, especially if they are not a main character, what their story is – how will they grow and develop? I’m sure that I use elements of myself, but first and foremost I try to focus on them.

Also, on a sidenote, do you have a twitter account or another form of social media?
I have a facebook fan-page and a website: www.davidwhitley.co.uk, and I’m trying to start blogging. I must admit, I find it difficult. As you can probably tell by now, I’m not a very spontaneous writer – the thought that whatever I put up online will be visible forever scares me, I can take two days to write a 500 word blog!